Recently, when Priyanka Chopra Jonas appeared on Oprah Winfrey's talk show Super Soul, she was at her candid best. The global icon talked about her memoir Unfinished and also made some explosive statements. Check out the full stiry 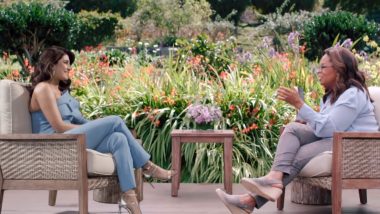 Recently, when Priyanka Chopra Jonas appeared on Oprah Winfrey's talk show Super Soul Sunday, she was at her candid best. The global icon talked about her memoir Unfinished and also made some explosive statements. Sharing one of her dark experience from the past, PC went on to admit that she was once mistreated by a Bollywood filmmaker. That's not it, as she also mentioned how she was told to 'strip down to underwear' for a dance sequence. However, later she eventually quit the movie. Priyanka Chopra-Oprah Winfrey Interview Promo Out! The Actress Talks About Leaving Behind Her ‘Insecurities of 20s' (Watch Video).

In the interview, she added how she regrets not protesting against the filmmaker who did her wrong. "I was so scared. I was new in the entertainment business and girls are always told that 'you don't want to get a reputation of being hard to work with.' So I worked within the system," she said. “I was told to have an opinion in a room that disagreed with me. I was always encouraged to have a voice," she added, talking about her upbringing.

In the memoir, PeeCee has highlighted the incident and penned, "I am standing right next to him, like behind him. He is sitting on his chair in a really entitled way, and then he takes the phone and goes, ‘Listen, people are going to come into the movies to watch her when she shows her panties. So it needs to be really short, so I can see her panties. You know those people sitting in the front? They should be able to see her panties.’ He said it four times and it is not even pretty in Hindi. It is worse. And I am 18-19 years old and I had shot two days for that movie, I remember." Priyanka Chopra Gets Criticised For Saying 'My Dad Used To Sing In A Mosque, I Am Aware Of Islam' On Oprah Winfrey's Show Super Soul Sunday.

FYI, the above-mentioned struggle is from her early days in Bollywood. Now, not just in Hindi cinema the actress has been making quite a name in the international market too. You rock, girl!

(The above story first appeared on LatestLY on Mar 22, 2021 01:10 PM IST. For more news and updates on politics, world, sports, entertainment and lifestyle, log on to our website latestly.com).