Priyanka Chopra Gets Criticised For Saying 'My Dad Used To Sing In A Mosque, I Am Aware Of Islam' On Oprah Winfrey's Show Super Soul Sunday

Priyanka Chopra is the guest on Oprah Winfrey's Super Soul Sunday show next. A video snippet of the same was released recently and that created quite the commotion on Twitter. PC claiming she is aware about Islam because her father sang in Mosques made Twitterati heavily criticise her 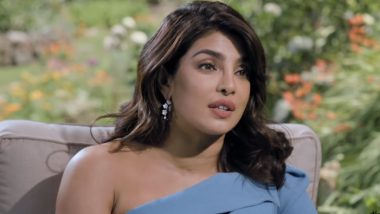 Priyanka Chopra is Oprah Winfrey's guest in her new show Super Soul Sunday which will air tomorrow. But a few snippets are being released to amp up the hype. So when a new video of Priyanka tells Winfrey about connect with Christianity, Islam, or Hinduism, nobody thought it would create such chaos on social media. Her comment on how her father sang at mosques and that made her aware of Islam is not going down well with people on Twitter. Apparently, singing is not allowed at Mosques.  Priyanka Chopra-Oprah Winfrey Interview Promo Out! The Actress Talks About Leaving Behind Her ‘Insecurities of 20s’ (Watch Video)

Priyanka says, "With the swirling number of religions that we have, that live within the country as well. I grew up in a convent school. I was aware of Christianity. My dad used to sing in a mosque, I was aware of Islam. I grew up in a Hindu family, I was aware of that. Spirituality is such a large part of India that you really cannot ignore it." Twitterati is apalled that she would say something like that without the basic knowledge of Islam. Some also couldn't understand how dad's singing at mosques made her aware of a religion and its principles.

Check out the video snippet of Priyanka Chopra and Oprah Winfrey from Super Soul Sunday here...

Or was it a daragah??

The utter disbelief that it actually happened

Did I seriously just wake up to @priyankachopra saying her dad sang in a mosque and that made her aware of Islam?

This is @priyankachopra's entire quote. Perhaps the only mistake she made is call a Dargah of Sufi Islam a masjid. Minor. #PriyankaChopra pic.twitter.com/pR8ey91kJ5

How is singing in a mosque makes one aware of Islam? Do many years in India didn't let you know about muslims around you? By this logic- my dad argues cases in court so I am aware of the law. #PriyankaChopra #Oprah 😂 pic.twitter.com/gDbVG5aZT1

she is clearly aware of Islam her dad used to sing in a mosque............ like whatttt #PriyankaChopra #islam @priyankachopra https://t.co/GPTJVmuVRO

The memes followed sooner than later

This happens when you try to win Muslim fans without having rudimentary knowledge of #islam 😂.@priyankachopra I sympathize with you but believe you me it's been one of your worst attempts to increase your fan base. #PriyankaChopra #botchedattempt @irenaakbar pic.twitter.com/w1vdO93VDg

Well, Priyanka Chopra might have made a guffaw here but guess when it's a global celebrity like her, it becomes unpardonable.

(The above story first appeared on LatestLY on Mar 20, 2021 04:05 PM IST. For more news and updates on politics, world, sports, entertainment and lifestyle, log on to our website latestly.com).