Priyanka Chopra to Get a Whopping Rs 12 Crore for Bharat, Same As What Deepika Padukone Got for Padmaavat

Priyanka Chopra is being paid the same amount for Bharat as Deepika Padukone for Padmaavat. 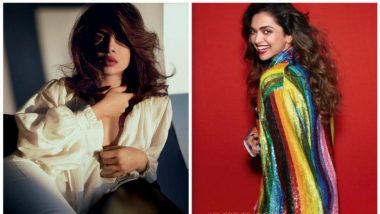 It was earlier reported that Deepika Padukone was paid a whopping Rs 12 crore for her performance in Sanjay Leela Bhansali's Padmaavat. And now, rumour has it that Priyanka Chopra is being paid the same amount for Bharat. According to mid-day, Priyanka Chopra and her team quoted Rs 14 crore as her remuneration for the Salman Khan starrer. The final figure has come down to Rs 12 crore which is equal to Deepika Padukone’s fees for Padmaavat.

Deepika and Priyanka are both doing exceptional work in Bollywood and Hollywood respectively. Bollywood actresses have brought up the topic of wage gap several times. But now with PeeCee and Dippy being a hefty sum like this, we think times are changing! However, if you see, Deepika has signed no film after Padmaavat, despite being such a fabulous actor. Speculations are rife that none of the filmmakers in Bollywood are ready to pay an actress such a huge amount.

Bharat is an official remake of South Korean film 'Ode to My Father'. The film will time travel through the protagonists' life from 1947 to 2000s. The ambitious period drama will be shot across locations in Abu Dhabi and Spain, besides Punjab and Delhi in India. We don't exactly know when Priyanka will start shooting for the film. For now, she's having a lovely time with beau Nick Jonas!

(The above story first appeared on LatestLY on Jun 14, 2018 09:01 AM IST. For more news and updates on politics, world, sports, entertainment and lifestyle, log on to our website latestly.com).