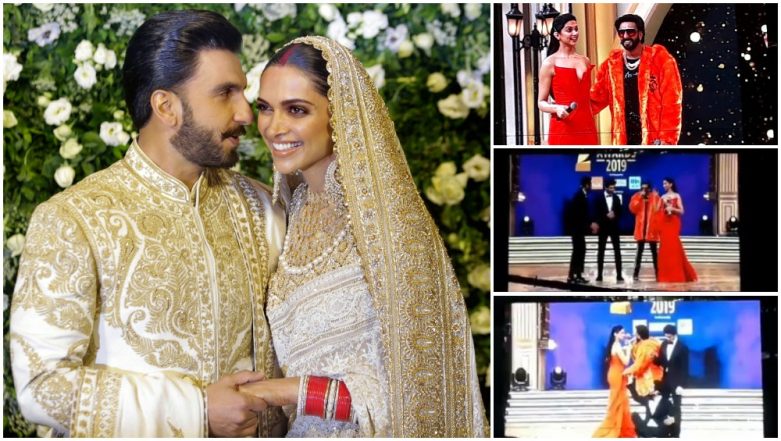 Ranveer Singh and Deepika Padukone got married last year in December. But it looks like Bollywood is not done away with #Deepveer wedding blues. The power couple were the cynosure of everyone's eyes at the recently concluded Zee Cine Awards 2019. Sure, it was attended by the who's who in the glam section of the industry, like Varun Dhawan, Madhuri Dixit, Kartik Aaryan, Janhvi Kapoor, Kiara Advani, Kriti Sanon, Vicky Kaushal, Ranbir Kapoor, Alia Bhatt et al. And yet Deepika and Ranveer managed to stand out with their effortless chemistry and PDA. Zee Cine Awards 2019 Full Winners List: Vicky Kaushal, Katrina Kaif, Kartik Aaryan, Janhvi Kapoor Take Away the Trophies Home.

What's more, Deepika and Ranveer also get to do their saat pheres on stage too! yes, Vicky Kaushal and Kartik Aaryan, who hosted the Zee Cine Awards 2019, made the couple come on stage and do the pheres once again this time for the audience.

After all the first time the pheres happened, it was only an exclusive invite-only affair at Lake Como, in Italy, where not even Bollywood was invited! Deepika Padukone-Alia Bhatt Pose Together While Their Partners Ranveer Singh and Ranbir Kapoor Bond at Zee Cine Awards 2019 Event (View Pics).

Here's another video of Ranveer sending flying kissed to Deepika from the stage, and she returning them:

Ranveer and Deepika send flying kisses to each other at the Zee Cine Awards 😍❤️ #deepveer pic.twitter.com/zg6EeraXJb

It was also a fine night award-wise for Ranveer and Deepika. Ranveer was the face of the show, while Deepika won the Best Actress for her performance in Padmaavat.