Swara Bhasker schools Prasoon Joshi over misinterpretation of a scene from her web-series Rasbhari. Check it out. 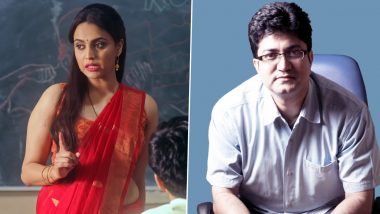 Swara Bhasker's new web-series titled 'Rasbhari' is out on Amazon Prime. The show sees the actress playing quite a bold role that of an English teacher named Shanu. However, as we all know how the internet is a tricky place. As soon as the series dropped online, Twitterverse was not happy with the content and started trolling the show. Well, if that was not enough, looks like even Bollywood's lyricist and Central Board of Film Certification Chairman, Prasoon Joshi is not impressed with one particular scene from the show where an adolescent girl can be seen dancing on Saat Samundar Par in front of adults. Joshi took to Twitter and shared his distaste over the same. Rasbhari Movie Review: Ayushmaan Saxena's Performance Saves This Sluggish Coming-Of-Age Comedy Starring Swara Bhasker.

In the Tweet, Prasoon Joshi mentioned how he is saddened by the not-so-good content portrayal that of a little girl child dancing provocatively in front of men drinking. Not just this, he also elaborated how these days freedom of expression is more like freedom of exploitation. Well, known not to keep mum, Swara replied to these claims and explained how the whole scene is understood by him. She further said that the girl is dancing on her own will, unaware about how the adults (society) around will look at her. Swara Bhasker On Twitter Trend #ArrestSwaraBhaskar: And That My Friends Is Why Most Celebrities in India Only Raise Their Voices For Elephants!

For the unversed, the scene mentioned above comes at the beginning of episode two of the series. It starts with the little girl (Swara's younger version) asking her mother can she dance as she is done with her homework. Cut straight to the little one dancing, we see her moves being judged by her father's friends (drinking) who tell him to keep her under control. 'Rasbhari' is a sex-ed drama starring Bhasker and Ayushmaan Saxena as leads. Stay tuned!

(The above story first appeared on LatestLY on Jun 26, 2020 07:26 PM IST. For more news and updates on politics, world, sports, entertainment and lifestyle, log on to our website latestly.com).