Akshay Kumar and the makers of Bell Bottom weren't the only one who dared to release their movies during such uncertain times. Here're five best opening weekend of Hindi movies amid pandemic. 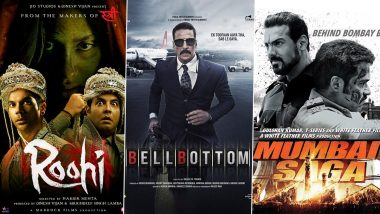 Pandemic blues haven't subsided for the cinema industry with theatres in many parts of the country still being closed. Akshay Kumar's Bell Bottom released recently with all the restrictions and curbs in place. So far the film has managed to earn little over Rs 16 crore and will probably wrap up its first week at the theatres with something around Rs 17-18 crore. Many hailed him and the makers for this brave move but they weren't the only brave ones. There were several other movies that released in the theatres whenever restrictions were eased in the country. We have compiled a list five Hindi movies with the best opening weekend collections since the pandemic. Laal Singh Chaddha, Spider-Man: No Way From Home, Pushpa Crowd December 2021 – A Blessing Or A Mistake for Box Office? (LatestLY Exclusive)

Bell Bottom released on August 19 amid restrictions on limited screens and at select centres. Akshay Kumar and the team made sure they manage to build an intrigue factor around the film. It did help the film to collect a decent sum in such circumstances but Trade experts believe it could have done much better despite such circumstances.

The horror comedy starring Rajkummar Rao, Janhvi Kapoor and Varun Sharma managed to interest people in such tough times. Interestingly, Roohi and Bell Bottom have almost similar opening weekends. But you have to consider here that Akshay Kumar's movie didn't get a release in Maharashtra, whereas Roohi enjoyed a good run here.

Sanjay Gupta went back to his typical the bhaidom from Mumbai for his next film. John Abraham's swelling fandom did bring back cheer to the theatre and so did Emraan Hashmi's. But the movie was critically panned for being just another dated Mumbai cop vs gangster drama. Emraan Hashmi Reacts to COVID-19 Impact on Theatrical Releases, Says ‘We Should Stop Sweating About Box Office’

We agree this is quite a surprising inclusion in the list but it did manage to earn Rs 0.75 crore at the box office in the first three days.

A biopic on India's champ shuttler Saina Nehwal, the movie managed to make only so much at the box office. Parineeti Chopra was highly praised for her performance.

(The above story first appeared on LatestLY on Aug 25, 2021 08:45 PM IST. For more news and updates on politics, world, sports, entertainment and lifestyle, log on to our website latestly.com).