Akshay Kumar's Bell Bottom seem to have given hope as many movies are scheduled to be released in December. There's a clash being between Aamir Khan's Laal Singh Chaddha and Allu Arjun's Pushpa in Christmas. Then there's Tadap on December 3 and Spider-Man: No Way From Home on December 17. 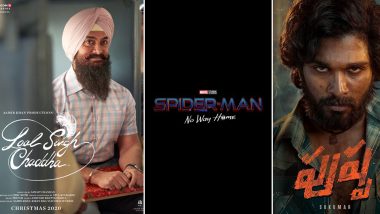 The Indian film industry has been reeling under duress eversince COVID-19 took the form of a pandemic and cinemas were shuttered. Many big budget movies released on OTT making theatre owners quite wary of their future.  Now, things are gradually is heading towards the normalcy and theatres are opening. Bell Bottom became the first big movie to release with restrictions in place. Maharashtra is yet to permit theatres to open. Bell Bottom Box Office: Akshay Kumar’s Film Should Have Earned More Despite Its Circumstances, Says Trade Expert (LatestLY Exclusive)

However, Akshay Kumar's film seem to have given hope as many movies are scheduled to be released in December. There's a supposed clash being predicted between Aamir Khan's Laal Singh Chaddha and Allu Arjun's Pushpa in Christmas. Then there's Tadap on December 3 and Spider-Man: No Way From Home on December 17. Now the question is will a crowded December spoil the fun?

Trade expert and Film producer Girish Johar believes it's a good thing. "Big movies will get the audience back to the theatres. There is a possibility of all the movies working at the box office. I agree overlapping should be avoided but it is good news for sure. If theatres open up everywhere in India in September, things will get better. Diwali releases will help the business to pick up in the coming days," Johar opines. Spider-Man No Way Home Trailer – Netizens Think They Spotted Charlie Cox’s Matt Murdock AKA Daredevil and Who Knows, It Might Be True!

While it does sound positive for the industry, it has to be noted here that multiplexes will have to make a few changes here. The overpriced food and beverages may not be the right way to approach customer engagement at the theatres if they wish to recover from this slump.

(The above story first appeared on LatestLY on Aug 25, 2021 07:40 PM IST. For more news and updates on politics, world, sports, entertainment and lifestyle, log on to our website latestly.com).