Salman Khan - Abhinav Kashyap Controversy: Arbaaz Takes a Legal Action Against the Director after He Tags Being Human Organisation as a Front for Money Laundering

Arbaaz Khan in his recent interaction has confirmed the news of taking a legal course against director Abhinav Kashyap after the latter tagged their Being Human organisation as a front for money laundering. 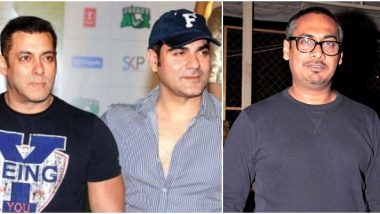 Besides blaming Salman Khan and his family for ruining and sabotaging his career, Abhinav Kashyap has also claimed that his apparel brand Being Human is a mere show-off and a front for money laundering. In his earlier Facebook post, the director had slammed the Khan family for pretending to help the poor and needy while all their prime agenda is to fool the public. While Arbaaz Khan had earlier hinted about taking a legal course in this controversy, the family has now managed to file a case against Kashyap. FWICE Reveals Dabangg Director Abhinav Kashyap Didn't File A Complaint Against Salman Khan With Them.

"We have taken legal action and have also complained to the film association. We would like to go that way, not interested in fighting this any other way... We are doing what we think is the best way to address this," Arbaaz confirmed in his conversation with Hindustan Times.

Abhinav had earlier slammed the Khan family after the nepotism debate had sparked online. He later blamed their Being Human organisation as a front for money laundering. "Salim Khan’s biggest idea is Being Human. The charity being done by Being Human is just a show-off. Five cycles used to be distributed in front of my eyes during the shooting of ‘Dabangg’, the next day the newspapers would print that the generous Salman Khan has donated 5000 cycles to the poor. It was all an effort to cleanse Salman Khan’s image so that the media and the judges were kind to them in his criminal court cases. They are making money by fooling the innocent public. They are selling Rs 500 jeans for Rs 5000 and laundering money in the name of charity. Their intention is not to give anything to anyone, but to only acquire from people. The government needs to probe Being Human…I will cooperate with the government," he wrote in his Facebook post. Dabangg Director Abhinav Kashyap Accuses Salman Khan and Family For Sabotaging His Career, Says Won't Cow Down Anymore (View Posts).

Meanwhile, Anurag Kashyap, Abhinav's brother was asked if he ever tried to mediate between the two parties and sort out their differences. To this the Gangs of Wasseypur director simply said, his brother had asked him to stay out of his business and that's what he's been doing.

(The above story first appeared on LatestLY on Jun 22, 2020 09:09 AM IST. For more news and updates on politics, world, sports, entertainment and lifestyle, log on to our website latestly.com).