Reports in Mumbai Mirror state that makers of War are planning to make a universe of agents with Salman Khan, Katrina Kaif, Hrithik Roshan, Shah Rukh, and Deepika Padukone. 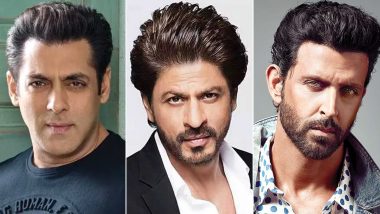 Reports in Mumbai Mirror state that makers of War are planning to make a universe of agents with Salman Khan, Katrina Kaif, Hrithik Roshan, Shah Rukh Khan, and Deepika Padukone. Salman Khan will be kickstarting the shoot for his next- Tiger Zinda Hai 3 in February 2021 and as for SRK, he has already begun shooting for him film Pathan with Deepika in Mumbai. If everything goes as per the plan, there are possibilities that we will get to see SRK as Pathan and Salman as Tiger in Hrithik Roshan's War sequel.

Talking about Pathan, Shah Rukh Khan was joined by Deepika Padukone on the sets of the film yesterday. Giving a sneak peek into her role, a source close to the development had revealed, "It’s just a couple of days’ stint now for Deepika, as she is also juggling Shakun Batra’s next. It’s an intriguing world of agents and Deepika will get to do a lot of action too. Though the title is SRK-centric, Deepika plays an edgy character, who joins Pathan on a mission. It’s on the lines of what Katrina Kaif’s Zoya was to Salman Khan’s Tiger in the Tiger franchise.” Katrina Kaif, Salman Khan, Shah Rukh Khan to be Roped in by Govt For Urdu Promotion: Report.

SRK also has Rajkumar Hirani's next and Atlee's film on the cards as well. While there has been no official announcement about these films, it is said that SRK will work on the next project in August 2021. As for Salman, he has just wrapped up the shoot for Radhe: Your Most Wanted Bhai. He is currently busy with hosting Bigg Boss Season 14.

(The above story first appeared on LatestLY on Nov 24, 2020 05:53 PM IST. For more news and updates on politics, world, sports, entertainment and lifestyle, log on to our website latestly.com).