As for Shah Rukh, because the film takes Aamir’s character through five decades, he will meet SRK on the sets of DDLJ during this journey of self-discovery. 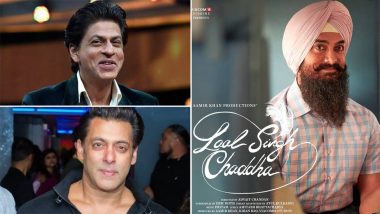 Laal Singh Chaddha starring Aamir Khan, Kareena Kapoor Khan is one of the most talked-about films nowadays. The film is currently in its production phase and from what we hear, many new additions to the cast are being made. It is already speculated that Shah Rukh Khan will be a part of the film in a cameo role but new reports suggest that Salman Khan will join the team too. Laal Singh Chaddha: Aamir Khan Will Start Shooting in Mumbai With Extra Safety Measures for Pregnant Kareena Kapoor Khan.

While this is an exciting news already. Reports in Mumbai Mirror suggest that these two legendary actors will be reprising one of their very iconic roles for Laal Singh Chaddha. While Shah Rukh Khan is said to be returning as Raj Malhotra from Dilwale Dulhania Le Jayenge, Salman will bring back Prem to the big screen. It is said that the makers initially planned to get the two Khans to feature as their iconic characters Karan Arjun, but that was eventually dismissed.

According to the reports, Shah Rukh Khan has already shot for his role while Salman is yet to give a nod for it. A source close to the development told, "His character Prem wooed the audience in the '90s, from Maine Pyar Kiya, Hum Aapke Hai Koun! to Hum Saath Saath Hain. Aamir is keen to get Salman back as Prem in his social dramedy." He added that there would be a track in the film which is set in 1989. The song will depict a change in audience taste, from action to romance, and the craze around Salman. The details of the same are expected to finalise soon. "

As for Shah Rukh, because the film takes Aamir’s character through five decades, he will meet SRK on the sets of DDLJ during this journey of self-discovery. SRK will be sharing his personal experiences with Aamir's character and the makers promise that the interaction between the two will bring in a lot of laughs. Vijay Sethupathi To Debut In Bollywood With Aamir Khan's Laal Singh Chaddha.

The team will be using prosthetics and VFX to make Salman and Shah Rukh Khan look like a younger version of themselves. Dick Cavett's cameo role from the 1994 original film is being replaced by Shah Rukh Khan's Raj in the Hindi adaptation.

(The above story first appeared on LatestLY on Nov 19, 2020 04:47 PM IST. For more news and updates on politics, world, sports, entertainment and lifestyle, log on to our website latestly.com).