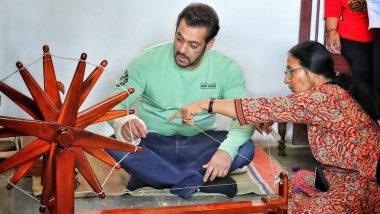 Bollywood superstar Salman Khan is currently in Ahmedabad to promote his latest release 'Antim: The Final Truth'. He even visited the famous Sabarmati Ashram. The actor was pictured on Monday at the Sabarmati Ashram and even tried his hands at the spinning wheel or 'charkha'. Antim Box Office Collection Day 3: Salman Khan and Aayush Sharma’s Film Sees Growth, Collects Rs 18.61 Crore.

The superstar looked dapper in jeans paired with a light green T-shirt. In the pictures obtained, the 'Dabangg' star can be seen sitting on the floor and observing how a charkha works. He then tries himself at spinning it. He was also seen writing a special message in the guest book. Antim: Review, Cast, Plot, Trailer, Release Date – All You Need To Know About Salman Khan, Aayush Sharma’s Film.

(The above story first appeared on LatestLY on Nov 29, 2021 06:51 PM IST. For more news and updates on politics, world, sports, entertainment and lifestyle, log on to our website latestly.com).