Bollywood actor, Sanjay Dutt went back in time and shared a black and white picture of his late father Sunil Dutt on his 91st birth anniversary. Read on. 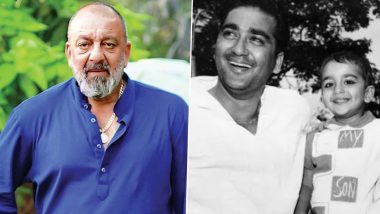 Bollywood actor, Sanjay Dutt went back in time and shared a black and white picture of his late father Sunil Dutt on his 91st birth anniversary. Going down the memory lane, the photo shared by the Vaastav actor sees him as a child along with his dad. The picture is indeed a reflection of what a strong bond Sanjay and his paa used to share back then. In the monochrome pic, we can see the father-son duo sharing a laugh while posing for the camera. "You have always been my source of strength and happiness. Happy Birthday Dad!," the actor captioned his post. Sanjay Dutt's Daughter Trishala Shares A Throwback Picture With Shah Rukh Khan But Can't Remember When It Was Taken.

Indeed, right from the pic to the caption, Dutt's post for his late father is nostalgic and how. Also, as soon the actor shared the post, his wife Maanayata Dutt and elder daughter Trishala Dutt also poured in love. Trishala wrote, “Happy Birthday Dada Ji.” Earlier on the death anniversary of her late mother, Nargis, Sanjay had penned a heart-wrenching piece dedicating to the superstar. These posts on the Bollywood star's social media timeline proves he was and is a family man. Nargis Dutt Death Anniversary: Sanjay Dutt Pens Down An Emotional Letter For The Late Superstar (View Post).

Check Out Sanjay Dutt's Post For His Father Below:

You have always been my source of strength and happiness. Happy Birthday Dad!❤️

For the unaware, Sunil Dutt breathed his last in 2005 due to heart attack. He was an actor, producer, director and politician. Meanwhile, on the professional front, Sanjay has many interesting films in his kitty. From Prashanth Neel's KGF: Chapter 2, Shamshera and Bhuj: The Pride of India. Stay tuned!

(The above story first appeared on LatestLY on Jun 06, 2020 03:33 PM IST. For more news and updates on politics, world, sports, entertainment and lifestyle, log on to our website latestly.com).