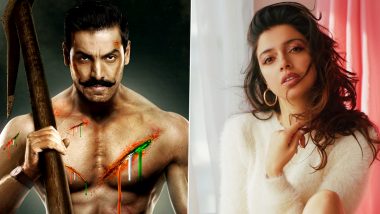 Satyameva Jayate 2, written and directed by Milap Zaveri, stars John Abraham and Divya Khosla Kumar in the lead. This upcoming action thriller is the sequel to the 2018 film, Satyameva Jayate. The team is all set to commence with the shooting of this film in Lucknow and it will go on until January next year. Satyameva Jayate 2: John Abraham's Next to Have an Eid Release on May 12, 2021.

Talking about the shooting schedule, Milap Zaveri told Mirror, “On the first day, we will shoot only with the lead pair, but subsequently, other actors like Harsh Chhaya, Gautami Kapoor, Shaad Randhawa, Anup Soni, and Sahil Vaid will join in. We will be shooting across Lucknow, including at heritage structures like palaces and colleges.” Touted to be a vigilante action film, producer Bhushan Kumar further states, “This script is a notch higher and Milap has worked rigorously on the action scenes with John during the lockdown.” Besides shooting in Lucknow, the team will also film a few portions in Mumbai. Milap Zaveri Compares John Abraham's Satyameva Jayate 2 Character to Marvel's Hulk.

SHOOT BEGINS TODAY... Filming of #SatyamevaJayate2 - starring #JohnAbraham and #DivyaKhoslaKumar - begins in #Lucknow today... Will continue till Jan 2021... Will also be shot at a #Mumbai studio early next year... Directed by #MilapZaveri... 12 May 2021 release. #Eid #Eid2021 pic.twitter.com/A86gqNtDFz

The makers of Satyameva Jayate 2 are ensuring complete safety of the cast and crew amid the shoot. The teams would be following all the safety guidelines that have been issued in the wake of coronavirus pandemic. Satyameva Jayate 2 is all set to be released during the time of Eid next year!

(The above story first appeared on LatestLY on Oct 20, 2020 12:13 PM IST. For more news and updates on politics, world, sports, entertainment and lifestyle, log on to our website latestly.com).