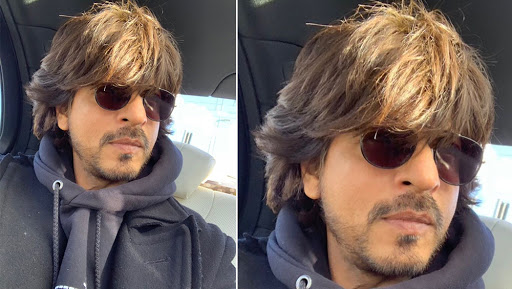 Shah Rukh Khan asks his fans if he should grow his hair longer? (Photo Credit: Instagram)

Bollywood's 'Baadshah' Shah Rukh Khan is definitely one of the most followed celebs across the globe with a whopping 16.4m followers on his Instagram account. The actor is quite active on the social media platform and keeps posting about his upcoming releases, events and also personal pictures of some quality time spent with his family. Later today, Shah Rukh took to the photo-sharing app to share a selfie and asked his fans whether or not he should let his hair grow for a couple more months. Well, I have to say the Zero actor looks absolutely amazing and charismatic with his messy long hair. When is Shah Rukh Khan’s Don 3 Going On the Floors? Co-Producer Ritesh Sidhwani Finally Answers!

Alongside the selfie, the actor wrote on Instagram, "Should I just let the hair grow for another few months??!" Well, fans, who couldn't stop drooling over his handsome look, want Shah Rukh to grow his hair longer with a ponytail for the sequel of the Don franchise. Shloka Mehta Dancing to Shah Rukh Khan and Anushka Sharma’s Song ‘Tujhme Rab Dikhta Hai’ Is a Sight to Behold! Watch Video

Should I just let the hair grow for another few months??!

Meanwhile, on the professional front, Shah Rukh Khan was last seen in Zero alongside Katrina Kaif and Anushka Sharma. The movie, helmed by Anand L Rai, however, failed to impress the audiences and perform at the box office. Watch this space for further updates.