Shankar Mahadevan Birthday Special: 11 Under-Appreciated But Amazing Tracks Composed By Shankar-Ehsaan-Loy That Deserve to Be in Your Playlist! (LatestLY Exclusive)

SEL have also seen some of their amazing songs not getting the appreciation that they deserve. So in this special feature, we look at 11 lovely songs tuned by the composer trio that were under-appreciated. Also join us in wishing the brilliant Shankar Mahadevan Many Many Happy Returns of the Day, as he turns 54 on March 3. 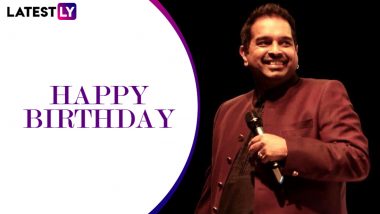 Shankar Mahadevan is not just one of the best singers we have in this country, but also a great composer, who still has that underrated quality associated with him (and his fellow compadres Ehsaan Noorani and Loy Mendonsa). What's more, the multi-faceted musician has even tried his hand at acting! For someone who has music and cinema so embedded in his blood, it is strange to even think that Shankar Mahadevan once used to be software engineer. Easily one of the most successful job switches, that benefitted more to the music lovers. Mother’s Day 2020: Shaan, Shankar Mahadevan to Sing Songs Embracing Motherhood.

As a singer, Mahadevan made his debut in 1994 with the Hindu dubbed versions of Kadhalan and Aladdin. He achieved nationwide fave with his indie-track "Breathless", though the singer confessed that he didn't exactly sing the whole track in one breath, but rather it was a cleverly edited trick. He later collaborated with Ehsaan and Loy, and the trio gave us some memorable soundtracks from Rockford to Mission Kashmir, to Dil Chahta Hai to Kal Ho Naa Ho to Rock On to... so and on. Shankar Mahadevan had gone on to win National Awards, Filmfare Awards and was recently conferred with Padma Shri.

Like with any composer (in this case-trio), SEL have also seen some of their amazing songs not getting the appreciation that they deserve. Either these tracks were not promoted properly, or the box office failure of the films they belonged to marred the chances of their reach. So in this special feature, we look at 11 songs tuned by the composer trio that were under-appreciated or even ignored at its time, and now deserves all your love and attention.

While researching for this article, I came across this absolute gem of a track that I am ruing of having never heard before. Can hardly blame myself here, for this track, sung by Mahadevan, belongs to the late Mukul Anand's Dus, starring Salman Khan and Sanjay Dutt, The film never got a release, as the director passed away before he could complete the film. Two other songs, "Suno Gaur Se Duniya Walo" and the title track did become popular, though.

Listen to the song:

Who thought one of Bollywood's biggest action stars would make his directorial debut with a romantic film? Though Dillagi tanked at the box office, Sunny Deol's film did grab attention for the genre and its soundtrack. But this really lilting track, sung by Shankar Mahadevan and Mahalaxmi Iyer, flew under the radar, in an album that is filled with some already good gems. There's a total '90s vibe to this song, that takes us down that memory lane.

Frankly it is the songs of this romcom that made me venture into theatre screening this sasta copy of the raunchy comedy, American Pie (directed by Hansal Mehta, no less!). While I do like the fun title track and the sensuous "Ooh Yeh", this lovely duet sun by Shaan and Sowmya Rao remains my eternal favourite.

Armaan's underperformance at the box office had kind of affected its lovely soundtrack, though songs like "Meri Zindagi Mein Aaye" and "Mere Dil Ka Tumse" still mesmerise the avid music listeners. However, this heartrending sombre track went under the radar, and that's simply sad. The song has two versions, each sung by Roop Kumar Rathod and Shreya Ghoshal, and they both are just touching to hear!

Another enjoyable soundtrack marred by the box office performance of the film. While I always had a soft corner for the 'sad' track "Dil Mein Dhadkano Mein", recently I have found a liking for this entertaining jugalbandi kinda song, where Shankar Mahadevan gets to show off his classical hold.

"Aao Na" and "Pyar Mein Sau Uljhane Hai" did rule the charts when this movie, starring Aishwarya Rai and Vivek Oberoi, came out. But this amazing track, sung by Mahadevan himself, never got the attention it totally deserved. Even with its stunning picturisation!

"Jeene Ke Ishare" is my most favourite song of Salman Khan's (I also believe that this film has his best performance). While SEL got a lot of notice for this track, there are a couple of other lovely songs that the trio composed for Revathi's film. A personal fave is this track sung by the brilliant Bombay Jayashri, that feature some amazing lines written by Prasoon Joshi. Salman Khan Birthday Special: 5 Chartbuster Songs Of Last Decade Of Bollywood’s Favourite Actor!

Listen to the song:

Easily one of the best romantic tracks composed by SEL, mellifluously sung by Sonu Nigam, that deserves more love and care.  A little trivia: the actress in the video is Annabelle Wallis, who has gone on to become a big name in Hollywood, starring in films like Tag, Annabelle, The Mummy reboot, and series like Peaky Blinders.

Although I wanted to restrict my list to Bollywood movies, I couldn't help but resist adding this track (and the next one) in this list. S-E-L was commissioned to compose song for the special edition of this popular Hollywood musical series, and "Ud Chale" was one of the fine gems that they came out with!

Salman Khan's Hollywood crossover attempt failed to create any kind of flutter for his otherwise sturdy career. But Marigold deserve some attention for S-E-L's soundtrack, especially this brilliant melody, sung by Shaan.

Shankar Mahadevan won a National Award for Best Singer for crooning this track, while Prasoon Joshi won the Best Lyrics. But how many of you have heard this stunning composition before? Your loss!

Listen to the Song:

If you have loved the above feature, please share your thoughts in the comments section below. Also join us in wishing the brilliant Shankar Mahadevan Many Many Happy Returns of the Day, as he turns 54 on March 3. Also special recommendation - do listen to the entire soundtrack of Mirzya - easily one of SEL's best compositions.

(The above story first appeared on LatestLY on Mar 03, 2021 08:21 AM IST. For more news and updates on politics, world, sports, entertainment and lifestyle, log on to our website latestly.com).