The Gangubai Kathiawadi star, Shantanu Maheshwari is multi-talented and has been in the industry since quite a long time. FYI, he had made his TV debut as a protagonist in Dil Dosti Dance (2011) on Channel V. And on his birthday today, here's a little trivia about him. Read on! 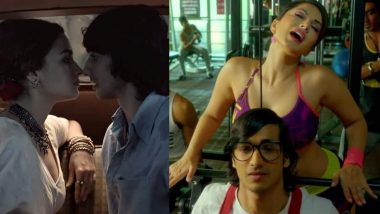 Shantanu Maheshwari is currently the talk of the town, thanks to his terrific acting alongside Alia Bhatt in Sanjay Leela Bhansali’s Gangubai Kathiawadi. Well, it’s indeed a dream movie debut for the actor which is beyond words. In the SLB film, he plays the role of a Muslim boy who falls in love with Alia’s Gangubai. Having said that, the way Shantanu has essayed the role of Afshan on screen with a lot of dedication is quite commendable. However, do you know that Alia is not the first Bollywood actress the birthday boy has romanced? Yes, you read that right! Shantanu Maheshwari Birthday Special: 7 Dancing Videos of TV’s Chocolate Boy That Are Entertaining AF!

For the unaware, before becoming Alia’s majnu in Gangubai Kathiawadi, the charmer has romanced Sunny Leone in a music video. Titled “Super Girl From China”, the track sees Shantanu as a geek who gets bowled over by Sunny’s sexiness after she turns from a mannequin into a human. The song is sung by none other than Kanika Kapoor wherein Sunny -Shantanu's chemistry looks fun and engaging. Gangubai Kathiawadi: Shantanu Maheshwari Talks About Being a Part of Sanjay Leela Bhansali’s Film, Says ‘It Was a Learning Experience’.

Isn't Shantanu, way too cute in the above clip? Having said that, be it Sunny or Alia, the actor has always served his best performance on screen and there's no doubt about it. Here's wishing the talented man a very happy birthday. Rise and shine!

(The above story first appeared on LatestLY on Mar 07, 2022 08:20 AM IST. For more news and updates on politics, world, sports, entertainment and lifestyle, log on to our website latestly.com).