Shreyas Talpade is one of the versatile actors, known for his works in Hindi and Marathi film industries. On the occasion of his birthday, let’s take a look at some of his best performances. 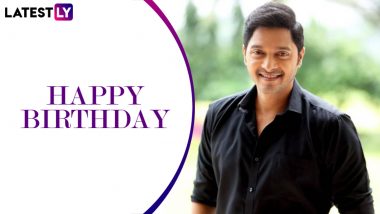 Shreyas Talpade is one of the versatile actors, known for his works in Hindi and Marathi film industries. Today the actor celebrates his 46th birthday and one just can’t thank him enough for portraying some impeccable roles on the big screen and entertaining us movie buffs. Before appearing in Hindi films, Shreyas made his acting debut by appearing in Marathi serials. Some of the soap operas that he appeared include Woh, Damini among others. It was his performance in Nagesh Kukunoor’s film Iqbal that shot him to fame. On the occasion of his birthday, let’s take a look at some of his best performances. Pushpa – The Rise: Shreyas Talpade Lends His Voice to Allu Arjun’s Titular Role in the Hindi Version.

This movie still continues to be one of the best films of Shreyas. He won audiences’ hearts by playing the role of a deaf and mute village lad who hopes to be a part of the Indian national cricket team someday. The film directed by Nagesh Kukunoor won National Film Award for Best Film on Other Social Issues.

In an interview with HT, Shreyas had stated, “I consider it my personal favourite. It is one of those films that remain special. With Dor, I saw a different Nagesh Kukunoor as a director.” He is seen as an impressionist in this movie who is talented in arts and mimicry.

We saw him as Shah Rukh Khan’s best pal in the movie. He played the character Pappu Master, the one who always stood by his friend in good and bad times.

It was a delight to watch Shreyas as Laxman Prasad Apte in this film directed by Rohit Shetty. His camaraderie with Ajay Devgn, who plays the character Gopal, was just outstanding. The duo had an impeccable comic timing.

The film helmed by Sajid Khan starred a stellar cast and that included Akshay Kumar, John Abraham, Riteish Deshmukh, Shreyas Talpade among others. The film was a laughter riot filled with loads of drama and it was also the fifth highest-grossing Bollywood film of 2012.

These are some of the popular roles essayed by Shreyas Talpade. We wish him the happiest birthday and many more amazing projects in the future.

(The above story first appeared on LatestLY on Jan 27, 2022 08:47 AM IST. For more news and updates on politics, world, sports, entertainment and lifestyle, log on to our website latestly.com).