Shubh Mangal Zyada Saavdhan Movie Review: Ayushmann Khurrana, Jitendra Kumar Are Spot On in a Film That Struggles to Come Out to the Viewer

Shubh Mangal Zyada Saavdhan is a romantic comedy drama film written and directed by Hitesh Kewalya. It is a sequel to the 2017 film Shubh Mangal Saavdhan starring Ayushmann Khurrana and Bhumi Pednekar. The new film also has Khurrana, in the lead, along with Jitendra Kumar, Gajraj Rao and Neena Gupta. Bhumi Pednekar has a cameo in the film. 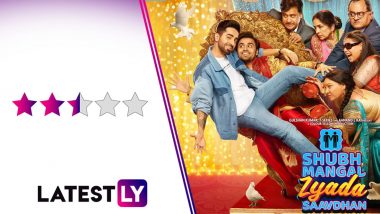 Kartik is in love with Aman (Jitendra Kumar), both of them staying in Delhi and working together. While trying to help out a friend (Bhumi Pednekar in the second pointless cameo of the week), they land in trouble and decide to join Aman's cousin Goggle (Maanvi Gagroo)'s baaraat to lay low. Aman's extended family consists of his scientist father Shankar Tripathi (Gajraj Rao), an overbearing mother Sunaina (Neena Gupta), Shankar's younger brother Chaman (Manu Rishi Chaddha), his nagging wife Champa (Sunita Rajwar), their kids, Goggle, who is desperate to get married, and a wise-cracking son Keshav (Neeraj Kumar).

Aman hasn't come out to his family yet, while they are already trying to fix his alliance with their neighbours' daughter Kusum (Pankhuri Awasthy). All the hell breaks loose in the Tripathi household when Shankar catches Kartik and Aman making out. Becoming an Amrish Puri in their love story, he is determined to get his son 'cured' of his homosexuality, while Kartik is ready to fight for his love no matter what's the cost.

Shubh Mangal Zyada Saavdhan is the sequel to the 2017 film Shubh Mangal Saavdhan, that dealt with erectile dysfunction. The latter was a remake of a really good and progressive Tamil film (Kalyana Samayal Saadham) and though it doesn't live up to the original, it was fun enough. Shubh Mangal Zyada Saavdhan is an original take, which is something we don't get to hear much when it comes to Bollywood. And it is perhaps gutsier than its predecessor.

When it comes to gay romances, Shubh Mangal Zyada Saavdhan isn't the first of its kind. We had had Fawad Khan portray a gay character in the excellent Kapoor & Sons, though he didn't have a romantic track in the film. Last year, Sonam Kapoor played a girl in a same-sex relationship in Ek Ladki Ko Dekha Toh Aisa Laga, which turned out to be the weakest part in the film. Now let's dissect what happens with Kartik and Aman in SMZS. Ayushmann Khurrana Sends Lots of Love to Vicky Kaushal as Shubh Mangal Zyaada Saavdhan and Bhoot are all Set to Clash at the Box Office.

Little spoilers ahead, but compared to the other two films mentioned in the previous paragraph, SMZS goes for a bolder approach in its depiction of same-sex love story. There are two kissing scenes, one of which has already been shown in the trailer. Kudos to both Ayushmann and Jeetu for shedding their inhibitions and go all out here. Too bad that the movie doesn't allow them to brew their passion.

When we see them first, it is already established that the leads are a couple, though it takes a couple of clumsily handled scenes and Bhumi's cameo to spell things out. Before we have a grasp of things, they are pushed right into the Tripathi frenzy. Here's where the problem comes.

The Tripathis are a quirky bunch with their own messy problems, played by incredibly likeable actors. But their frequent squabbles and the humorous situations that they lead to often take the impetus out of the main premise. The movie doesn't allow these characters to settle down and have a calm conversation, as they drag past romances and property matters while the real, far more interesting debate gets pushed to the corner. At times, we also get the feeling that Ayushmann Khurrana feels quite secondary to the plot.

Watch The Trailer of Shubh Mangal Zyada Saavdhan below:

Speaking of the lead couple, we really don't get to feel their chemistry and therefore, their love for each other. Instead we get is Aman looking like a sad horse throughout, while Kartik becomes a more yo version of what Ayushmann played in his TikTok version in Bala. In the first film, it is the romance between the lead couple that gives weight to their 'sexual trouble'. Here, we have characters just throw their sexuality on our faces, but resists the idea on developing them further with more nuances, leading to a very verbose, preachy climax that has become a trope in Ayushmann's films.

What's even more surprising is that humour, one of the biggest strengths in any AK film, is so okayish here, with the funniest jokes already in the trailer. The loud treatment often removes the naturalism from the conflict at hand, and makes things look more farcical than needed.

There is a running gag about 'kaala ghobi' (black cauliflower) invented by Shankar (what made him think a black cauliflower is something people would buy?) that doesn't have the required payoff.

The lines often come as corny. When a character describes himself being beaten black and blue, he says, 'Neil Nitin Mukesh'. Another time, a bride is frustrated that her baraat is just dancing and not moving from the spot, she says, 'Yahan toh Dance India Dance ho raha hai'. These lines may sound funny in the writer's head, but don't come across the same on the screen. There are some occasions where Kewalya's writing (even the direction is flat) sparkle. Like that smart callback to DDLJ. Or Shankar beating Kartik with a stick, played to a beats of a popular '90s song and recalling similar scenes from films of that era. Or even that one incredibly funny and poignant scene, where Aman comes out to his stubborn parents throwing in a lot of references to hormones to put his point across.

However, such moments are very few, and if it wasn't for the actors' excellent comic timing, most of the jokes would have fallen flat. With more focus placed on the (insipid) humour to slide across the inconsistencies in the script, the writing and the character building often go for a toss.

The performances of the entire cast is a huge saving grace for the film. Ayushmann Khurrana, who is getting better with every film, is in once again in excellent form here as the lover who revels in his flamboyance and passion for his lover. Without getting caricaturish, Khurrana nails most of the tics that his character needs to display. It is a gutsy act no doubt, and hope it inspires Bollywood to open its heart to more queer characters that are rightly done.

Jitendra Kumar aka Jeetu has a more serious role, being the emotional bone of the film. It is his character's story of coming out, and the actor does justice to the part, especially in the scenes where he stands up to his family. Gajraj Rao and Neena Gupta, who were last seen together in Badhaai Ho, are turning out the one of the best onscreen-jodis in the past five years. Both actors are fantastic and make their sketchily written characters feel so believable. The rest of the cast, including Manu Rishi Chaddha, Sunita Rajwar, Maanvi Gagroo (she deserves her own spinoff), Neeraj Kumar and Pankhuri Awasthy do good in their respective characters and make the average attempts at humour worth watching.

Shubh Mangal Zyada Saavdhan and Ayushmann Khurrana both deserve to be lauded for bringing queer movement to mainstream cinema in an audience-friendly manner. As a movie, though, Shubh Mangal Zyada Saavdhan turns out to be a passable entertainer that struggles with the huge responsibility laden on its shoulders. The conversation is timely; sadly, the setting isn't that great.

(The above story first appeared on LatestLY on Feb 21, 2020 01:38 PM IST. For more news and updates on politics, world, sports, entertainment and lifestyle, log on to our website latestly.com).