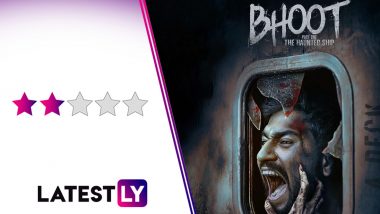 Bhoot Part One - The Haunted Ship Movie Review: There are two things I found the most innovative about the complicated-named Bhoot: Part One - The Haunted Ship, Dharma Productions' latest attempt to scare us. The first was how the usual Dharma logo got a very creepy new redesign at the beginning of the film. The second comes towards the end when two characters "Bonebreaker" and "Faceless" find themselves mentioned in the credit scenes, and I have no clue who these two are. Maybe Bhanu Pratap Singh's directorial debut had a Left  4 Dead subplot that somehow got excised from the final product. Apart from these two, the rest of the film is two-hour-long excuse to throw jump-scares on you, while you are pondering if the new Bhoot has anything new to tell you. Bhoot: The Haunted Ship Star Vicky Kaushal Says He Is Jealous of People Who Don’t Fear Watching Horror Movies Alone.

Bhoot is inspired by a real-life incident that happened a few years back when an abandoned ship got stranded in Mumbai. The movie begins in 2001 with a very Ghost Ship-like eerie scene on the merchant ship Sea-Bird, when a birthday party aboard the vessel takes a weird turn after the Captain's daughter is abducted by something supernatural. Years later, in 2012, the ship makes an unexpected appearance in Mumbai, getting beached there. Prithvi (Vicky Kaushal), a Shipping officer gets assigned to release the ship back in the sea.

Prithvi, who has recently gone through a tragic incident in the family and suffers from hallucinations, experiences hauntings on the ship, and soon the supernatural occurrences follow him home. Are the ghostly matters all in his mind? What terrifying tale does the ship has to say? Is it that it has nothing really new to say?

Karan Johar's production house has had two attempts in horror in the past. First is the 2005 film Kaal, that was promoted with a lot of promise, but turned out to be a film that was confused as to what it wanted to rip off - Final Destination or the archetypical serial killer film. At the beginning of this year, Karan Johar directed a segment in Ghost Stories that nearly scared people from subscribing to Netflix.

Bhoot was an opportunity for his production house to salvage some pride when it comes to the genre. Roping a promising star like Vicky Kaushal gave enough impetus to the film. But Bhoot turns out to be as scary as an episode of Fear Files. Add a very clumsy dramatic plot to the film, and Bhoot becomes exactly what you expect a horror movie from the house that gave you Kalank last year - well-made but kinda pointless. Bhoot Song Channa Ve: Vicky Kaushal and Bhumi Pednekar's Romance Is at Its Peak But a Tragedy Awaits (Watch Video)

To be fair, the scares were good, till the film overplayed them in the second half. The setting of the  derelict ship, enhanced by the terrific sound design and Pushkar Singh's camerawork, manages to create some very eerie atmosphere. Each clang, each clunk feels terrifying to hear and there were some moments that I had to watch through my fingers. Drawing parallels of the ship's unspoken tragedy to that of the protagonist is also an interesting storytelling technique (if you haven't seen the same thing in movies like Triangle, The Descent and other such stuff).

Then, again, the depiction of scares aren't anything that you haven't experienced in the past. You know what's around the corner, and once the camera moves there, you won't be disappointed in finding a jump scare waiting for you. From The Ring to Annabelle to even Bollywood's own Pari, the ingredients seem borrowed from everywhere. But as long as the setting feels different, I was willing to overlook the lack of original scares here.

It also helps that the movie has a short runtime. Still, the movie does find the time to add a girl-trafficking subplot that had no connection to the main premise and only serves to display Prithvi's suicidal bravado. Something we found have found out sooner or later, anyway.

The scares, however, turns out to be only thing Bhoot has to offer. The whole mystery around the happenings on the ship turns out to be a very yawn-worthy yarn with an insipid twist towards the end. Not to mention, a shockingly bad Vikram Bhatt-inspired climax that turns whatever little fright you had by then into peals of laughter. You really won't believe the kind of CGI used in the scenes here, and wonder when Bollywood would be void of tantra-mantra mumbo-jumbo in dealing with the spooks.

Even though a horror film doesn't demand logic to be used, you can't help but question some very glaring plotholes. Like why was there no security around this big-ass ship making it so easy enough for anyone can access it in the night? If the ghost can work beyond the confines of the ship, why can't it take its revenge against its intended main target? What's the exact point of casting Bhumi Pednekar in such a thankless role, even if the movie pegged her as a 'special appearance'? Why no one told Ashutosh Rana that the shooting for Raaz is over 18 years back?

These questions make me ponder upon what really irked about Bhoot. It wasn't the endless plotholes, or the derivative scares. It was that despite the polish, Bhoot is more soulless than the dead in the film. The plotting is simply lazy and the movie doesn't even play around with the aspect of Prithvi's problematic hallucinations, a plot element that could have made this film even more wicked.

Watch The Trailer Bhoot Part One - The Haunted Ship:

And to add more salt to the wound, there is a mid-credit scene that is as dull and unexciting as it comes.

Vicky Kaushal does a good job when he has to be a Scream King - terrified of the spooky things happening around him. Otherwise, his performance surprisingly lacks energy, the actor simply going through the motions and in those times, I felt like shouting at him, 'Where's the josh?'. Akash Dhar, who plays Prithvi's bestie, does okay in a role that mostly requires him to be angry at his friend for one reason or the other. Ashutosh Rana is passable. Meher Vij brings some impetus in the weak third act.

- A Scary First Half

- Can't Make Anything of Its Convoluted Premise

The haunted ship in Bhoot Part One runs both out of steam and scares before it could reach its conclusion. It's worth a watch only if you are in the mood for some borrowed frights. Dharma had confidently announced that Bhoot would be the first of a planned franchise. The last time they made such an announcement was for Drive. Now their next big planned franchise is Brahmastra. Okay, KJo, so you did get me scared after all, thinking about the future of your franchises!

(The above story first appeared on LatestLY on Feb 20, 2020 11:28 PM IST. For more news and updates on politics, world, sports, entertainment and lifestyle, log on to our website latestly.com).