Yes, Siddhant Chaturvedi and Katrina Kaif are working on a project together and we have the confirmation coming straight from the horse's mouth. 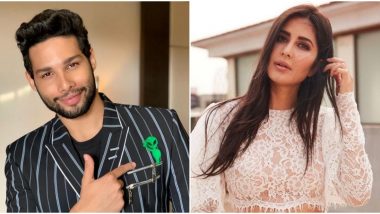 Horror comedies are the next big thing in Bollywood and Siddhant Chaturvedi is the new blue-eyed boy. The Gully Boy actor is busy announcing his one too many projects one after another, recent being his collaboration with none other than Katrina Kaif. Yes, the duo is working together on a horror comedy and the shooting of which will start somewhere next year. Siddhant in his recent conversation with Miss Malini spilt some beans on his upcoming projects that include one with the Bharat actress.

When the Gully Boy actor was asked about his next announcements after Bunty aur Babli 2 and Shakun Batra's next, he revealed, "There is a horror-comedy with Katrina Kaif that will happen by the end of the year." Exciting isn't it? While Shraddha Kapoor and Rajkummar Rao's Stree which belonged in the same genre went on to become a huge success, Janhvi Kapoor too will follow in the footsteps with Roohi-Afza and later we have Katrina and Sid. In fact, we wonder if the duo's collaboration is for Dinesh Vijan's in-the-making horror universe.

Vijan in one of his earlier interactions had confirmed about developing a horror universe much like Rohit Shetty's cop universe. Shraddha's Stree and Janhvi's Roohi-Afza are a part his same big universe and he plans to include one more release, Munjha, in 2021. Assuming that Sid and Katrina are working with him for same won't be reading (too much) between the lines, no?

Besides this, Chaturvedi also revealed details of his next with Deepika Padukone and Ananya Panday. "Yes, the film is about the darker side of relationships. In Bollywood terms, I would call it a romantic thriller but in two terms I would call it is domestic noir. It is very different and it is romantic. I am excited to work with Shakun and romance Deepika and Ananya," he said. Well, Zoya Akhtar's find is surely going places and it's quite safe to say that the next few years could very well belong to him.

Interestingly, Siddhant had earlier auditioned for the role of a striper in Katrina and Fawad Khan's Raat Baaki. The movie was being helmed by Uri director Aditya Dhar. Unfortunately, it got shelved after Pakistani actors were banned from working in India. But guess Sid was always destined to work with Kaif.

(The above story first appeared on LatestLY on Dec 24, 2019 08:00 PM IST. For more news and updates on politics, world, sports, entertainment and lifestyle, log on to our website latestly.com).