As the break up rumours of Bollywood couple Sidharth Malhotra and Kiara Advani gain momentum, the two have shared cryptic posts on their respective social media handles. 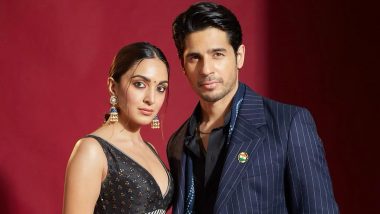 As the break up rumours of Bollywood couple Sidharth Malhotra and Kiara Advani gain momentum, the two have shared cryptic posts on their respective social media handles. While Sidharth shared a stunning picture of himself from his recent work trip to Turkey on his Instagram, Kiara shared a picture of herself from a photoshoot where she can be seen in a garden appreciating the beauty of bougainvillea. Indian Police Force Announcement Teaser: Sidharth Malhotra Looks Suave in Uniform for Rohit Shetty’s Amazon Prime Cop Series (Watch Video).

Sidharth wrote in his caption, "A day without sunshine is like, you know, night.- Steve Martin". Meanwhile, Kiara posted a gorgeous image of herself enjoying the beauty of nature and captioned the post as, "Plant smiles, grow laughter, harvest love." Sources have revealed that Sidharth and Kiara have stopped meeting each other. Sidharth Malhotra Reveals His First Look From Rohit Shetty’s Cop-Universe Web-Series; Major Update To Drop on April 20 at This Time!

Although both Sidharth and Kiara have neither accepted nor denied the dating rumours, there has been a strong buzz in B-town about the two being together with their on-screen chemistry in 'Shershaah' adding fuel to the fire. In such a scenario, the rumours around their breakup have seemed to shake up their followers.

Meanwhile, on the work front, Sidharth has films like 'Mission Majnu', 'Yodha', and 'Thank God' in the pipeline. Kiara Advani, has 'Bhool Bhulaiyaa 2' on the horizon, 'Govinda Naam Mera' and 'Jug Jugg Jeeyo' scheduled to release in the later part of the year.

(The above story first appeared on LatestLY on Apr 24, 2022 03:58 PM IST. For more news and updates on politics, world, sports, entertainment and lifestyle, log on to our website latestly.com).