Sonakshi Sinha Takes a Dig at Kangana Ranaut, Says Nepotism Word Was Introduced by a Person Whose Sister is Managing Her Work

The actress in her recent interaction has taken a dig at Kangana Ranaut for opposing nepotism in Bollywood and has also lent her support to her fellow contemporaries like Alia Bhatt and Sonam Kapoor. 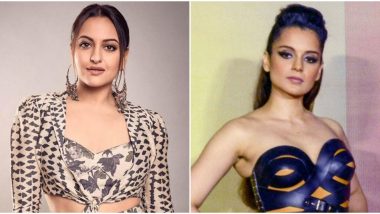 Sonakshi Sinha has apparently taken a dig at Kangana Ranaut over the raging debate around Bollywood nepotism. Without taking names, Sonakshi has said that the word nepotism has been introduced and sensationalised by a person whose sister is managing their work. Kangana Ranaut’s Old Interview Clips Downplaying Nepotism and Privilege Are Going Viral After Her Controversial Interview to Arnab Goswami (Watch Video).

"I find it so amusing that this word nepotism has been introduced and sensationalised by a person whose sister is managing their work. And I don't think I really want to give it that much more importance," Sonakshi Sinha told Hindustan Times in an interview.

The actress further informed in the same interview that even though she had bagged her debut film back in 2010 because her family "knew" Salman Khan's family, she had to work hard after being selected for the role. Kangana Ranaut's Brother Aksht Joins Her Production House, Actress Gets Trolled For NEPOTISM!

"Having said that, my father (Shatrughan Sinha) has never picked up the phone and called any producer to say, ‘Take my daughter in your film'. I was offered Dabangg (2010) because yes, my family knew Salman Khan's family, but that's it. They saw me, thought I'll fit the role, and I was offered the film. After that, I had to work very hard," the actress said.

When quizzed on the ongoing social media trend of netizens trolling star kids, Sonakshi said, "These people are calling out young girls — Ananya Panday, Alia Bhatt, Janhvi Kapoor, Sonam Kapoor — imagine what they'd be going through. It's just not nice. Though I know they're very strong girls and are keeping their chin up and sailing through it, so I'm happy about that. I understand people are hurt right now, and I get it they need to vent somewhere. But... all the people being attacked for nepotism were not even launched by their families, so it's bizarre what's happening." Sushant Singh Rajput’s Family Lawyer Dismisses Kangana Ranaut's Claims That Movie Mafias Were Involved in His Suicide, Says She Was Not in Touch with Sushant’s Father.

On the work front, Sonakshi will next be seen alongside Ajay Devgn and Sanjay Dutt in the period drama Bhuj: The Pride of India.

(The above story first appeared on LatestLY on Aug 16, 2020 11:50 PM IST. For more news and updates on politics, world, sports, entertainment and lifestyle, log on to our website latestly.com).