Amitabh Bachchan and Bomai Irani are yet to give a nod to the film. But if this union happen, it will be fun to see the two veteran actor celebrate friendship 'Sooraj Barjatya' style on the screen. 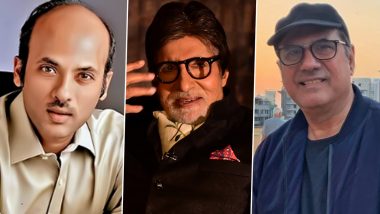 Salman Khan has had a busy year with all the project in hand and it looks like he is planning to not pick up any new projects for a while. He was supposed to do a film with Suraj Barjatya but since the superstar is occupied with a lot of work already in 2021, he has asked the filmmaker to postpone the film for some time. The filmmaker, who is very eager to work with Salman Khan, has agreed to his terms and has put the project on hold. But while Barjatya is ready to wait for Salman, he is anxious to work on a new film. Sooraj Barjatya Hints at Reuniting with Salman Khan for his Next.

Sooraj Barjatya worked on Prem Ratan Dhan Payo back in 2015 and has been waiting to work on something ever since. He is very keen on getting back on the sets and has hence moved to a new project for the time being. He has been working on a story with Amitabh Bachchan and Boman Irani in his mind as the lead actors in the film. A source close to the development revealed to SpotBoyE, “It’s not exactly a quickie. But yes, the next Salman project is delayed. So, Sooraj ji decided to direct this other script that he had. The script was written with Amitji and Bomanji(Irani) in mind.”

The source also added that the film will be about two friends who have known each for decades and their lives together. The family values that make a Barjatya film exclusive will be instilled in this story as well. Amitabh Bachchan and Bomai Irani are yet to give a nod to the film. But if this union happen, it will be fun to see the two veteran actor celebrate friendship 'Sooraj Barjatya' style on the screen. Kartik Aaryan Enters 'Rajshri' Camp? Will Star in Sooraj Barjatya's Next Production - Read Details.

Back in 2020, Sooraj Barjatya had revealed that he is already penning his next film and superstar Salman Khan, has liked the idea. "I am writing it. In a year or two, I will be done. I have discussed the idea with Salman and he has liked it. It is in my space -- family, drama and emotions," Barjatya told PTI in an interview. The filmmaker is also focusing on his younger son Avnish's first directorial venture. "Avnish is going to make his debut as a director. In late 2017, I was ready to start my film with Salman bhai. I was in the middle of writing, but my son, who assisted me on 'Prem Ratan....', said he is ready to start as a director," added Barjatya.

As for Salman, he will be seen in Radhe: Your Most Wanted Bhai and also recently revealed that he is a part of Shah Rukh Khan starrer Pathan. Salman will also be seen in Mahesh Manjrekar's Antim, locking horns with Aayush Sharma. Apart from this, Salman is also busy with the shoot of Bigg Boss 14 which is nearing its grand finale.

(The above story first appeared on LatestLY on Feb 16, 2021 03:18 PM IST. For more news and updates on politics, world, sports, entertainment and lifestyle, log on to our website latestly.com).