Sunil Dutt Birth Anniversary: Did You Know The Legendary Actor Landed His First Film Thanks To Dilip Kumar's Shikast?

On Sunil Dutt's birth anniversary, we remember an incident that led to him bag his first movie, Railway Platform. He was a show presenter for Radio Ceylon who was on the sets of Dilip Kumar's Shikast to interview the director. Read on to know what happened next. 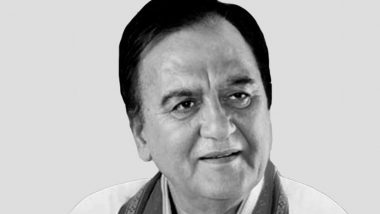 Today is the birth anniversary of Sunil Dutt, the man of many talents. It was so easy to like him on screen. With that amicable face, sweet smile and perhaps the calmest personality ever, Dutt's every role has been precious, especially the ones he did in the black and white era. The late actor before becoming a huge star did several odd jobs. He took up a job at the BEST Transportation's Engineering division and later hosted a show Lipton Ki Mehfil on Radio Ceylon. It was the latter that changed his life. He went on the sets of Dilip Kumar's Shikast to interview the director and bagged a role as lead in a movie called Railway Platform. Entertainment News | Sanjay Dutt Calls Father Sunil Dutt ‘idol, Friend and Mentor’ on His Death Anniversary

On ZEE TV's Jeena Isi Ka Naam Hai, hosted by late Farooq Sheikh, Sunil Dutt recounted the time he gave a test on the sets of Dilip Kumar's movie. The director Ramesh Saigal asked him to audition and he wore Kumar's outfit for the same because he had gone there to interview the cast. Sunil Dutt Birth Anniversary: 5 Interesting Facts About The Legendary Actor That You May Not Be Aware Of

In fact, director Saigal was the one who gave the actor his screen name, Sunil Dutt. His real name was Balraj Dutt but that would have conflicted with the legendary Balraj Sahani.

(The above story first appeared on LatestLY on Jun 06, 2021 08:40 AM IST. For more news and updates on politics, world, sports, entertainment and lifestyle, log on to our website latestly.com).