It was in the beginning of this year when Suraj Pe Mangal had gone on floors. Starring Manoj Bajpayee, Fatima Sana Shaikh and Diljit Dosanjh in the lead, this comedy drama is set in the 90s. 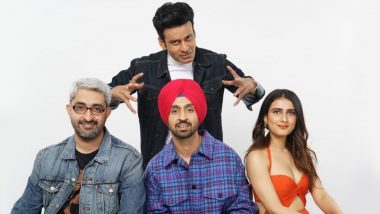 It was in the beginning of this year when Suraj Pe Mangal had gone on floors. Starring Manoj Bajpayee, Fatima Sana Shaikh and Diljit Dosanjh in the lead, this comedy drama is set in the 90s. Owing to the ongoing global crisis, there are several filmmakers and producers who are looking forward to release their films on OTT platforms as there is no clarity by when the cinema halls will reopen and things will get back to normal. But looks like Suraj Pe Mangal director Abhishek Sharma has no plans to skip the theatrical release of this upcoming film. Suraj Pe Mangal Bhari Starring Diljit Dosanjh, Fatima Sana Shaikh, Manoj Bajpayee Goes On Floor Today!

Talking about this slice-of-life film, Suraj Pe Mangal, filmmaker Abhishek Sharma told Mid-Day, “The movie will be ready in a month. I will have a meeting with my distribution team soon to gauge when theatres are likely to open. This is a film meant for a theatrical experience, so we are all working towards giving it a big-screen release.” Suraj Pe Mangal Bhari: Diljit Dosanjh and Manoj Bajpayee Shoot at Mumbai’s Crowded CSMT Platform.

In an interview to HT, the filmmaker dropped an hint about what Suraj Pe Mangal is all about. He was quoted as saying, “Suraj Pe Mangal is a comedy set in the 90s - I call that the era of innocence. Wedding matches in those days involved a background check and there was no social media - you did not have Facebook, Instagram or Twitter where you could stalk a prospective groom or bride. You had to physically follow the person. So Manoj is essaying the character of Mangal - a guy who carries out such background checks. Diljit aka Suraj is the groom being targeted here and the Tom and Jerry kind of situation that ensues will make people enjoy watching it.” Produced under the banners of Zee Studios and Essel Vision Productions, the makers are yet to announce the film’s release date.

(The above story first appeared on LatestLY on Jul 18, 2020 09:14 AM IST. For more news and updates on politics, world, sports, entertainment and lifestyle, log on to our website latestly.com).