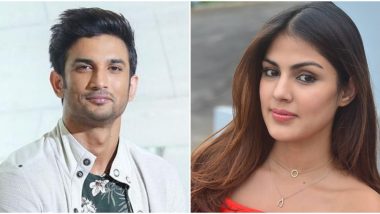 Bollywood actor Sushant Singh Rajput’s death not only left everyone shocked, but the various allegations and speculations made behind it has made everyone anxious to know the truth. From family to pals to fans, all have been eagerly seeking justice for the late actor. Sushant’s father KK Singh had filed an FIR in Patna accusing Rhea Chakraborty of abetting his son to commit suicide. He had also alleged that Rhea had illegally transferred Rs 15 crore from Sushant’s bank account and also mentally harassed him. As soon as Mr Singh had filed an FIR, a four-member team of Bihar Police had arrived in Mumbai to investigate the case. Soon, Rhea filed a petition at the Supreme Court (SC) seeking a transfer of the case from Patna to Mumbai. The hearing of her plea will take place today, August 5. Rhea Chakraborty's Lawyer Says 'There Can't Be Transfer Of a Case Which Had No Legal Basis For Bihar to Get Involved'.

According to reports, the petition filed by Rhea Chakraborty had mentioned that the case to be investigated by the Mumbai Police as it is in their jurisdiction. Rhea had said in her petition, “It is pertinent to mention that the deceased and petitioner were in live-in relationship since a year up till June 8, 2020 when the petitioner had temporarily shifted to her own residence in Mumbai,” reports Zee News. The actress’ petition will be heard today by a bench led by Justice Hrishikesh Roy. Sushant Singh Rajput Funeral: Rhea Chakraborty's Lawyer Satish Manshinde Claims Actress' Name Was 'Struck Off' From List Of Attendees And She Was Not Allowed.

Sushant Singh Rajput had died by suicide on June 14, 2020. Rhea Chakraborty had mentioned in her plea that the late actor was suffering from depression and was also on anti-depressants.

(The above story first appeared on LatestLY on Aug 05, 2020 10:48 AM IST. For more news and updates on politics, world, sports, entertainment and lifestyle, log on to our website latestly.com).