Sushant Singh Rajput Funeral: Rhea Chakraborty's Lawyer Satish Manshinde Claims Actress' Name Was 'Struck Off' From List Of Attendees And She Was Not Allowed 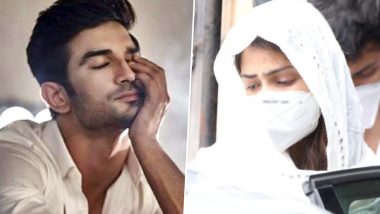 With each passing day, actor Sushant Singh Rajput's death case seems to be getting a new twist. While preliminary reports and questioning ruled out foul play and it was established that Sushant had indeed died by suicide, an FIR filed by the late actor's father KK Singh in Patna, has heated things up. KK Singh filed an FIR in Patna against Rhea Chakraborty and her family for abetment of suicide, theft, fraud, cheating and wrongful confinement. Ankita Lokhande On Not Attending Sushant Singh Rajput's Last Rites: 'I Didn't Go To His Funeral Because I Could Not See Him That Way'.

And while Rhea Chakraborty continues to be in the midst of the storm with new allegations and newer counter-allegations coming to fore with each passing day, Rhea's lawyer Satish Manshinde has made another shocking revelation. RIP Sushant Singh Rajput: The Late Actor's Family Immerses His Ashes In River Ganga (View Pics).

Back on June 15, at the time of Sushant's last rites, Rhea's absence gave rise to gossip and there was speculation that Rhea was asked to stay away from the funeral. A report in Times of India quoted Rhea's lawyer as saying, "Rhea Chakraborty has always been living in Mumbai. She was in Mumbai on 14th June 2020. She was not allowed to attend the Funeral of Sushant Singh (Rajput) as her name was struck off from the list of 20." Sushant Singh Rajput Funeral: Kriti Sanon, Shraddha Kapoor Attend the Ceremony to Pay their Condolences (View Pics).

The lawyer also went on to reveal that Rhea, at every given time, has co-operated with the investigations and Mumbai Police. "She was summoned by Mumbai Police on 18th of June 2020 at Bandra Police Station. Her statement was recorded there. Subsequently, she was summoned to appear on 17th July 2020 at Santacruz Police station. She appeared and recorded her supplementary statement." the lawyer reportedly concluded.

(The above story first appeared on LatestLY on Aug 04, 2020 01:23 PM IST. For more news and updates on politics, world, sports, entertainment and lifestyle, log on to our website latestly.com).