Ankita Lokhande On Not Attending Sushant Singh Rajput's Last Rites: 'I Didn't Go To His Funeral Because I Could Not See Him That Way' 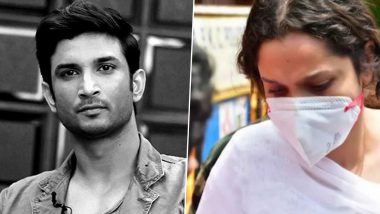 Actor Sushant Singh Rajput's death by suicide on June 14, took the world by storm. And the simple case of suicide due to depression has turned into a storm of sorts with SSR's father KK Singh filing an FIR against the last actor's girlfriend Rhea Chakraborty for abetment of suicide, wrongful confinement, cheating, theft and fraud. And while that battle wages in Indian courts, actress Ankita Lokhande, who was in a relationship with Sushant for almost 7 years, finally broke her silence and spoke up about her ex. Sushant Singh Rajput Case: Bihar Police Questions Ankita Lokhande At Her Residence.

She refused to believe Sushant was depressed and revealed to Republic in an interview, "He was not a depressed guy. I have not seen a person like Sushant who wrote down his own dreams. I remember when we were in a relationship, Sushant had written his 5-year plan in a diary and I saw after 5 years how he had fulfilled all of his plans." Sushant Singh Rajput Never Texted Ankita Lokhande About His Relationship with Rhea Chakraborty.

The actress was also quizzed about how she found out about his death and why she chose to meet with SSR's parents after his last rites and did not go to his funeral. Opening up to Republic, Ankita revealed, "I picked up the call (she received from an unknown number) and there was this reporter and she said 'Ankita!! Sushant has committed suicide. And I was finished!.. It was something.. you don't expect something like this.. It is very difficult for me.. and for all of us.. I went out.. my mom was there.. and it was all over. All news channels had only this.. that Sushant is no more.. that he had committed suicide, that was the headline.. and I didn't know what to do. Ankita Lokhande Confirms Sushant Singh Rajput Rejected Sanjay Leela Bhansali's Movies.

She also went on to reveal that she chose not to attend Sushant's last rites, "I didn't go to his funeral because I could not see him in that way." Talking about her visit to his father and sister, Ankita told the channel, "I decided that I cannot go to the funeral.. I wanted to meet his family.. I wanted to make sure that they were okay.. The departed one had gone.. but Papa was there.. his sisters were there.. and that was my duty.. to go and meet them.. and they were in a bad condition.. very bad condition."

(The above story first appeared on LatestLY on Aug 02, 2020 12:56 PM IST. For more news and updates on politics, world, sports, entertainment and lifestyle, log on to our website latestly.com).