While many believe the actor must be remembered and cherished for the lovely work he has left behind, there are others who have been finding solace in remembering the actor from his past interviews. There's no doubt that Sushant was an intelligent talker and it's amazing the kind of advice he has left behind. 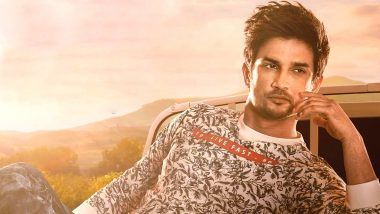 Sushant Singh Rajput's death sent shockwaves in Bollywood. The actor aged 34, died by suicide at his Mumbai residence. Not just the industry and those close to him but also netizens and his fans were deeply saddened by his loss. His death seems to have opened up a dialogue on mental health and also industry pressure and particularly nepotism. While many believe the actor must be remembered and cherished for the lovely work he has left behind, there are others who have been finding solace in remembering the actor from his past interviews. There's no doubt that Sushant was an intelligent talker and it's amazing the kind of advice he has left behind. Sushant Singh Rajput Was NOT Replaced In Fitoor And Half Girlfriend Over Nepotism; The Late Actor Revealed The Truth in An Old Interview.

While many of his old pictures and videos are going viral on social media. In one such interview, Sushant spoke about what he fears the most. Whilst speaking to popular trade analyst Komal Nahta in an interaction, when asked about if there is nothing he fears in life, Sushant replied saying, “Probably death. Because three hours that I sleep, I don’t know who I am. So that ‘not know who you are’ is slightly scary, probably that happens when you die too.” Sushant Singh Rajput's Pet Dog Fudge is ALIVE! Here's the Fact Check on Its 'Death' Rumours.

Check Out This Old Interview:

Shattered 💔💔 Complete shattered to millions billions pieces 😭😭💔💔💔 . Unbearable Sushant 😢😢😢😭😭😭 Unbearable baby . sushantsinghrajput Come and take me with you Sushant , you promised to be always there for me , you promised that we both will be together forever and you put this emoji for me ✊❤️ forever and ever , don’t break your promises Sushant . We agreed that we are one soul in 2 bodies and I am mixed with your blood , I am just a reflection of your heart and charm . Do you remember how much you were happy hearing this from me 😭😭😭😭😭😭😭😢😢😢😢😢😢😢 . So pls my man don’t leave me alone in this worse hard life my love 😭😭😭💔💔💔💔 Take me with you 🙏 I am dreaming of the day I will be there with you in an eternal life forever ♾ 😭💔❤️ . Living and dying for you Sushant . And pls I beg you all don’t say the word Late before his name cauz it hurts my heart a lot 😭😭😭😭😢😢😢😢🙏🙏🙏 . #sushantsinghrajput #myman

Sushant had lost his mother quite early on and he missed her dearly, which was visible from his posts. Although, the actor in this interaction mentioned how he feared death not because he lost a loved one. Much is being said and written about the actor and his 'genius' mind. Several of Sushant's co-stars have also mentioned that he was a man full of dreams and wanted to make it big. Unfortunately, the world lost out on experiencing more of his genius.

(The above story first appeared on LatestLY on Jun 24, 2020 04:48 PM IST. For more news and updates on politics, world, sports, entertainment and lifestyle, log on to our website latestly.com).