Some social media posts were going viral claiming that Fudge lost his life just in a few days after Sushant's demise. However, that's totally not true. 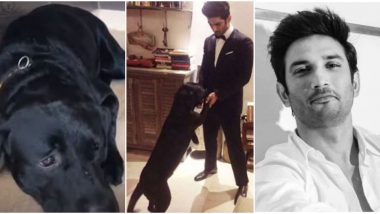 Internet can't get over the shocking demise of Sushant Singh Rajput. The Bollywood actor's suicide has raised many questions and also has given a rise to multiple reports and fake news as well. One such piece of news doing the rounds on the internet was about the late star's pet dog, Fudge's death. Some social media posts were going viral claiming that Fudge lost his life just in a few days after Sushant's demise. However, that's totally not true. Karan Johar's Koffee With Karan 6 To Be Shelved Due To Backlash After Sushant Singh Rajput's Demise?.

As per the report by TOI, the rumours of Fudge's death are complete false and that it is doing fine. They also mentioned that not just Fudge but the other three dogs that Sushant took care of, are also doing well at his Pavna house.

The post that is going viral was claiming that the dog did did not eat food for several days as it could not bear the loss of its owner. However, gladly, the report is said to be untrue and the Kedarnath actor's fur friends are healthy and safe. Earlier, there were videos doing the round on the internet claiming that Fudge was sad and crying as it missed Sushant. We hope that they are well-taken care of and are fine!

(The above story first appeared on LatestLY on Jun 22, 2020 09:10 PM IST. For more news and updates on politics, world, sports, entertainment and lifestyle, log on to our website latestly.com).