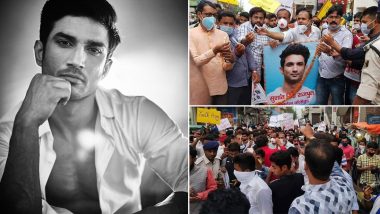 Sushant Singh Rajput's death news has brought a storm on social media wherein the Bollywood biggies are blamed for the Chhichhore actor's suicide. Reportedly, Sushant was suffering from depression from the past six months. His untimely demise has led many to voice on the micro-blogging site where #NepotismInBollywood and #BoycottKaranJohar has become the topmost trend. Netizens think that it's the prevailing camp system in Bollywood which is majorly responsible for the actor's death. People are angry and so in Patna, a protest was held demanding justice for Sushant. FYI, the late actor's hometown happens to be Patna. Ekta Kapoor On Criminal Case Filed Against Her Over Sushant Singh Rajput's Death: 'I'm Beyond Upset At How Convoluted Theories Can Be' (Read Statement).

A few video and photos have gone viral from the protest where we can see fans holding placards which read boycott nepotism. Some of the placards are also against Karan Johar and Salman Khan. People in the photos are seen wearing masks amid the COVID-19 scare while urging to take action against the manipulative minds from B-town. Kriti Sanon Calls Out Blind Items, Social Media's Toxicity and Media Coverage Of Funerals After Sushant Singh Rajput's Death (Read Tweets).

For the unversed, the late actor hailed from Patna and had shifted his base to Mumbai with an aim to fulfil his dream of being an actor. After initial days of struggle, he landed his first break on Television in Ekta Kapoor's melodramatic serial titled Pavitra Rishta. Sushant's last film on the silverscreen was Chhihhore. May his soul rest in peace. Stay tuned!

(The above story first appeared on LatestLY on Jun 17, 2020 05:39 PM IST. For more news and updates on politics, world, sports, entertainment and lifestyle, log on to our website latestly.com).