After unveiling the looks of Tanhaji Malusare and Savitribai Malusare, the trailer of the movie Tanhaji: The Unsung Warrior was finally released on November 19. 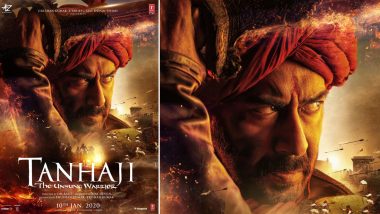 After unveiling the looks of Tanhaji Malusare and Savitribai Malusare, the trailer of the movie Tanhaji: The Unsung Warrior was finally released on November 19. Not only does the trailer captures the grandeur of the film, but it has also raised curiosity about Tanhaji Malusare. Ajay Devgn essays the central character 'Tanhaji' in the movie and the minute detailing of his look has been done on the advice of Sheetal Malusare, who is the twelfth descendant of Tanhaji Malusare. Tanhaji the Unsung Warrior: How the Battle of Sinhagad in Ajay Devgn, Saif Ali Khan’s Movie Might Have Inspired a Hrithik Roshan Film in the Past!

Sheetal Malusare, who lives in Mahad taluka of Maharashtra, has instructed the makers of the movie and director Om Raut about the detailing of Tanhaji's appearance. In an exclusive interview with LatestLY Marathi, Sheetal said, "The character of Tanhaji Malusare has been aptly essayed by Ajay Devgn. Be it his impressive moustache style or his ferocious look, I had mentioned Om Raut about every minute detail. And every detail of his look has been taken into consideration."

While describing Tanhaji's moustache, Sheetal said, "He had an imperial style of moustache. And interestingly, his moustache could even weigh a lemon on it."

Kajol, one of the most versatile actresses of Bollywood has played the role of Savitribai Malusare in the movie. Talking about her look, she said, "Om Raut showed us how Kajol's look was going to be in the film. That look was so perfect that we immediately approved it." Tanhaji: The Unsung Warrior is releasing all over India on January 10, 2020.

(The above story first appeared on LatestLY on Nov 20, 2019 08:06 PM IST. For more news and updates on politics, world, sports, entertainment and lifestyle, log on to our website latestly.com).