A bulked up man with a blue sabre is standing on the tips of the fingers and from what we can make out, we think this is what Vicky's character will look like. 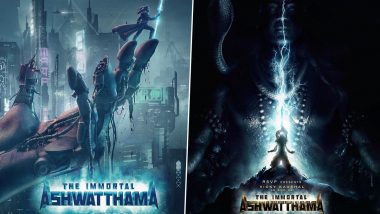 Vicky Kaushal and Aditya Dhar created history with the release of their film URI: The Surgical Strike two years back. The film made the actor a household name and everyone could not wait for the duo to collaborate once again for The Immortal Ashwatthama. The film has been in talks for the longest time but Vicky finally has put an end to all the anticipation.  To celebrate the second anniversary of URI, he shared the first look posters of his upcoming film. The Immortal Ashwatthama: Vicky Kaushal Starrer To Go On Floors By April 2021.

The first poster shows a hand that has mechanical equipment attached to the fingers. There are wires and a lit-up city in the background. A bulked up man with a blue sabre is standing on the tips of the fingers and from what we can make out, we think this is what Vicky's character will look like. The second poster features a huge idol of Lord Shiva. There is a man holding a sword in his hand while facing the lord. There's lighting adding drama to the poster and giving us an idea of what the film will look like!

Talking more about the film, Vicky Kaushal is required to train for three months for the film and will begin to do the same from February this year. Director Aditya Dhar shared that the actor has to weigh more than 100kgs for this role. Aditya also revealed that Vicky Kaushal's other project Takht was supposed to wrap up by December, and then shoot for The Immortal Ashwatthama was supposed to kick off by early 2021. But despite the change in the line-up caused due to the lockdown, the film will go on floors by April 2021. He also stated, “We will begin shooting in Europe, primarily the UK, and then head to Iceland. The final schedule will be in Mumbai. The plan may change depending on the COVID-19 crisis in these countries.” The Immortal Ashwatthama: Vicky Kaushal's Film To Be Shot In Greenland, Tokyo and New Zealand.

Based on the popular character from epic saga Mahabharata, Vicky will be seen essaying the role of Dronacharya’s son, Ashwatthama in this mythological drama. Apart from this, the actor also has a few more interesting projects in his hand. He will be seen in Meghna Gulzar's film on Sam Manekshaw and Shoojit Sircar's Sardar Udham Singh, where he plays the titular revolutionary. Vicky will also be seen sharing screen space with former beauty queen Manushi Chhillar in a project.

(The above story first appeared on LatestLY on Jan 11, 2021 12:42 PM IST. For more news and updates on politics, world, sports, entertainment and lifestyle, log on to our website latestly.com).