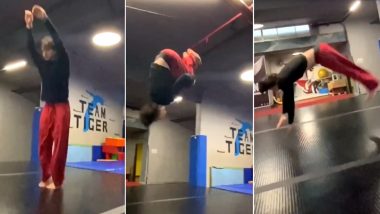 Bollywood action star and fitness enthusiast Tiger Shroff has stunned fans once again with his agility. In a new video he posted on Instagram, Tiger pulls off consecutive backflips with ease. Rapper Yo Yo Honey Singh was amazed by Tiger's backflips and wrote in the comment section: "My head is spinnin bro!! Amazing." Unbelievable Song Video: After Flooring Us With His Smooth Vocals, Tiger Shroff Shows Off Some Stellar Moves To His Debut Single (Watch Video)

Recently Tiger stunned fans with a video where he is seen pulling off a flying kick after his recent injury. With no shooting, he has been busy exploring other avenues of talent. Earlier this month, the young actor made his debut as a singer with the single, "Unbelievable". Tiger Shroff On Possible Collab With BTS: ‘Meri To Aukaat Nahi Hai’

The video of the song, helmed by "Student Of The Year 2" director Punit Malhotra, shows Tiger as a hotel staff member romancing a colleague. Introducing the song, Tiger has spoken of how he was influenced by Michael Jackson while growing up.

(The above story first appeared on LatestLY on Sep 30, 2020 07:50 PM IST. For more news and updates on politics, world, sports, entertainment and lifestyle, log on to our website latestly.com).