Unbelievable Song Video: After Flooring Us With His Smooth Vocals, Tiger Shroff Shows Off Some Stellar Moves To His Debut Single (Watch Video)

Sharing the music video on his Twitter account, the actor wrote, "Its pretty lonely dancing all by myself cant wait for you guys to join in on the #YouAreUnbelievable dance challenge." 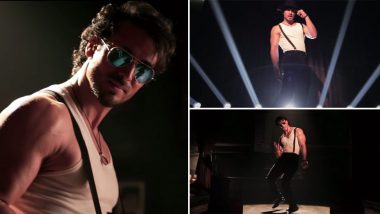 After Tiger Shroff dropped his debut single "Unbelievable" a week ago, a dance video for the same song has now been released and it is sure to leave you even more impressed than before. Shroff is known for his amazing moves and with this song video, he does exactly that, showcase his best. While fans must have missed seeing him on the big screen in his usual action avatar amid the pandemic, they are going to be over the moon with this music video considering watching Tiger Shroff dance is one of the most delightful things. Tiger Shroff's Song Unbelievable Out! the Actor's Voice Is as Smooth as His Dance Moves (Watch Video).

Sharing the music video on his Twitter account, the actor wrote, "Its pretty lonely dancing all by myself cant wait for you guys to join in on the #YouAreUnbelievable dance challenge." We bet watching this song video, many of the actor's fans are going to take this dance challenge and showcase their moves. In the video, we see Tiger pulling off some amazing locking and popping moves. The dance has been choreographed by Piyush Bhagat and Shazia Samji. Tiger Shroff On Possible Collab With BTS: 'Meri To Aukaat Nahi Hai'.

Ever since Tiger dropped his first song as a singer, fans and friends have been talking about the actor's talent and asking if there's really anything he can't do. The song was received well by fans and Shroff also got a lot of praises from his industry friends. The actor's rumoured girlfriend, Disha Patani had taken to Instagram to share the song as she wrote, "How can someone be so multitalented? You are #Unbelievable, Tiger Shroff", in another Instagram story she wrote, "What a beautiful song! Love it and your voice, Tiger Shroff."

Tiger himself while releasing the song's audio had said that it's been the most terrifying experience for him. He said, "And just when I thought jumping off one building to another was tough...for me this has been the most challenging yet full-filling experience. Highest respect to musicians all across the globe, so much to learn ... but until then here's presenting our humble effort. #YouAreUnbelievable out now!"

(The above story first appeared on LatestLY on Sep 29, 2020 01:34 PM IST. For more news and updates on politics, world, sports, entertainment and lifestyle, log on to our website latestly.com).