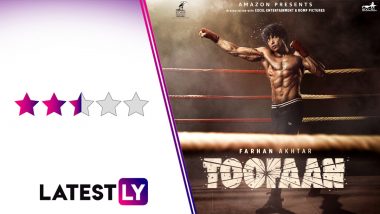 Toofaan Movie Review: Rakeysh Omprakash Mehra's Toofaan is coming to our screens with a lot of comparisons against it. It is a boxing drama, and therefore by default, the first name that comes up is Rocky. Toofaan, starring Farhan Akhtar and Mrunal Thakur, might not be Rocky in its impact but shares some of its traits. The trouble is the comparison doesn't end with one movie, and Toofaan just couldn't manage to survive those deja vu feels, Toofaan: Mrunal Thakur Says Her Role in Farhan Akhtar’s Boxing Movie Made Her Strong, Confident.

Azhar Ali (Farhan Akhtar) is a goon from Dongri who works as a collection agent for Jaffer Bhai (Vijay Raaz wasted in a thankless role). Of course he also has a golden heart, as he takes care of orphaned children, a track that is later completely forgotten by the movie.

Azhar meets two things that change his perspective on life - Ananya (Mrunal Thakur), the doctor working at the nearby government hospital, and boxing. Ananya, who first has disdain for him, begins to encourage Azhar to chase boxing as a profession, because she thinks he can change as a person doing so. How she thinks that making a goon, who makes his living by beating up people, learn a sport that involves bashing heads can change him is beyond comprehension. But who are we to question the power of boners, as Azhar focuses himself on boxing so that he can impress the cute doctor.

Azhar approaches famed coach Nana Prabhu (Paresh Rawal) to train, and the latter, after a couple of scenes of hesitation, accepts him. Soon Azhar become a much talked about champion, whom the media nicknames as Toofaan, but before he could reach the national level championship, he falls out with his coach over what the latter sees as an act of betrayal.

How many of you were excited when it was announced that Farhan is reuniting with his Bhaag Milkha Bhaag director? Granted that Toofaan is not a biopic like the other movie, but Mehra and AKhtar joining hands for a sports movie was exciting enough. Unfortunately, Toofaan as a film gives us very little opportunities to feel enthused, unless it expect us to be floored by the ample scenes of its hero's ripped abs. Say what, that could have worked if Bhaag Milkha Bhaag hadn't done it before, and in a better way.

More than a sports drama, Toofaan is a love story between a Muslim guy and a Hindu doctor, and it is this love story that gives the film its soul. The reason I am mentioning the religions of the characters is that it is the religious angle of this romance that only makes Toofaan somewhat relevant. Apart from the casting of Paresh Rawal as a bigoted coach, who hates Muslims and believes a Muslim guy loving a Hindu girl is love jihad. Considering the actor is somewhat of a bigot in real life too, wonder how the makers managed this casting coup.

The casting miracle aside, the inter-religious romance bring only a few minor flutters to the drama, and feels only padded in the storyline to make Toofaan feel relevant in the present sociopolitical climate. So the track is easily overshadowed by the over-familiar amalgamation of sports drama tropes that overcomes the storyline. The trailer of Toofaan has already had Twitterati accuse it of being similar to Salman Khan and Anushka Sharma's Sultan, though Sultan was about wrestling and MMA. After watching the film, I can't deny there are similarities, though Toofaan has a more consistent tone and a more likeable love story, made better by Mrunal Thakur's charming performance.

The parallels sadly don't end there. You can also point out the influences of Raging Bull and Southpaw (Jack Gyllenhaal starrer) in there as well. Why even the title of the film is a Hindi translation of a boxing drama starring Denzel Washington. Presence of Vijay Maurya as a screenplaywright also harks us back to another underdog rising from the slums of Mumbai to a star - Gully Boy - and Toofaan couldn't come anywhere near that league.

Look, I don't mind a director playing into influences of more acclaimed movies (Gully Boy isn't completely original too). This week's other release, Malik, also has plenty of inspirations and influences. But what lets down Toofaan as a film is that it struggles to come out of the predictable arena, while Mehra's direction hardly breaks any new grounds here. The boxing scenes are humdrum and mechanical, and scarcely brings you to the edge of your seat. Anil Sharma's melodramatic Apne had more tense boxing scenes.

The 161 minute long runtime only adds to the woes of the film. Even the music by a usually dependable SEL is very so-so, save for the rap song played during the end-credits.

As for Farhan, his performance comes off as a mixed bag. As the bhai, he struggles to pull off the tapori act and feels miscast in trying to pass off as younger man. Farhan does far better in the latter portions that focuses more on him failing at his ambition and later fighting to comeback for his wife. The performer in him shines when he plays to his age and then portray that inner turmoil really well.

- The Love Story of Azhar and Ananya Have Some Moments

As both a followup to Bhaag Milkha Bhaag and in being a sports drama, Toofaan comes across a major disappointment in not being groundbreaking in anyway, except in its weak attempt to being topical. Toofaan is now streaming on Amazon Prime Video.

(The above story first appeared on LatestLY on Jul 16, 2021 12:34 AM IST. For more news and updates on politics, world, sports, entertainment and lifestyle, log on to our website latestly.com).