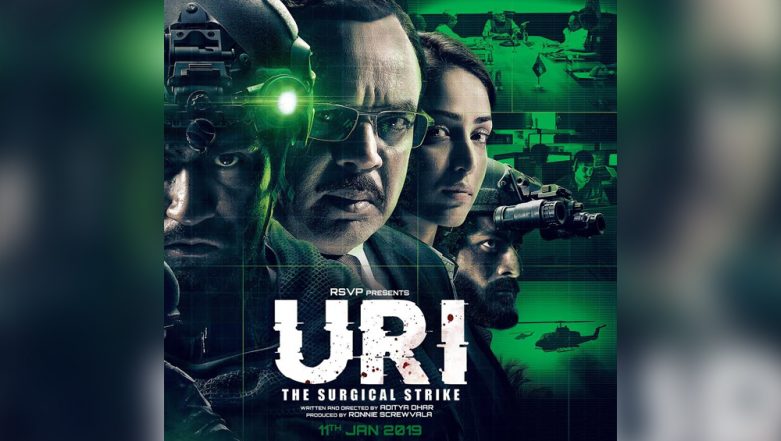 Uri: The Surgical Strike is the first hit of 2019. (Photo Credit: Twitter)

Yes, you heard that right. After becoming the first blockbuster of 2019 in India, Uri: The Surgical Strike could soon become the first Bollywood movie of the year to reach the Rs 300 crore mark at the worldwide box office. Made on a budget of Rs 54 crore, Aditya Dhar's directorial venture has turned out to be a monstrous hit not just in India but abroad as well. Starring Vicky Kaushal, Yami Gautam, Paresh Rawal, and television actor Mohit Raina, the military drama is currently ruling at the box office in India and eyeing to surpass the Rs 200 crore mark. Uri - The Surgical Strike Box Office Collection Day 25: Vicky Kaushal Starrer Fares Well on Its Fourth Monday, Should Enter Rs 200 Crore Club This Week.

After faring well on its fourth Monday, Vicky starrer continued its good run at the ticket windows on Tuesday as well. The film, according to BollywoodHungama, raked in another Rs 2.50 crore on day 26, bringing its total domestic collection to Rs 195.34 crore which absolutely is mindboggling.

Further, a report in Boxofficeindia.com says, "Uri - The Surgical Strike is heading for the business of 300 crore worldwide which will be a first for a small-medium budget film. Badhaai Ho last year reached 215 crore and Raazi was 192 crore with Stree and Sonu Ke Titu Ki Sweety on 173 and 149 crore respectively." Uri - The Surgical Strike Box Office Collection Day 24: Vicky Kaushal's Film Beats Baahubali 2 Record and Creates History, Rakes in Rs 189.76 Crore.

At the moment, Uri's worldwide collection stands at Rs 270 crore as per Boxofficeindia.com. With no big release this week, Uri will certainly continue to get cash registers ringing which means it can easily surpass the Rs 300 crore at the worldwide BO. With such staggering box office numbers, all we can say is, Uri's josh is still very high.