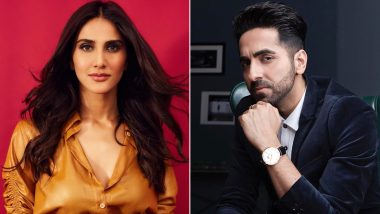 Actress Vaani Kapoor looks forward to working with Ayushmann Khurrana in an upcoming film. She says Ayushmann is one of the most earnest actors of this generation. "Ayushmann is one of the most earnest actors of our generation. The way he moulds himself into different characters amazes me. One of my all-time favourite performances by him is 'Vicky Donor'. For a debut film, I was amazed by his performance. In 'Andhadhun' and 'Article 15', too, he was brilliant. I am really looking forward to working with him!" Vaani said. Vaani Kapoor to Share Screen Space with Ayushmann Khurrana for the First Time in Abhishek Kapoor’s Romantic Film

Vaani is set to play Ayushmann's love interest in Abhishek Kapoor's untitled upcoming film. Shooting is set to start in October. The film is a love story and casts Ayushmann as an athlete. During the Covid pandemic, Vaani has managed to sign two important films, the other being "Bell Bottom", starring Akshay Kumar. Ayushmann Khurrana’s Bala to Be Screened at Toronto’s Lavazza Drive-In Film Festival

"I feel thrilled to be a part of such amazing projects. Both are very different and, as an actor, this is what we look for -- roles that can challenge us and help us diversify our talent and craft," said Vaani.

(The above story first appeared on LatestLY on Aug 13, 2020 11:37 AM IST. For more news and updates on politics, world, sports, entertainment and lifestyle, log on to our website latestly.com).