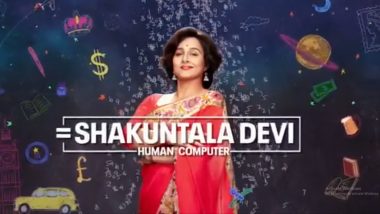 It's happening and there's no way you can deny these changes. While distributors are certainly upset with filmmakers' decision to release their projects on OTT directly, producers insist they have no choice but to embrace the ongoing scenario and adapt accordingly. After Ayushmann Khurrana and Amitabh Bachchan's Gulabo Sitabo premiere was announced on Amazon Prime on June 12, Vidya Balan's Shakuntala Devi is the next in line to follow the suit. The biopic sees Balan essaying the role of a witty math wizard who was also recognised as a human-computer.

Confirming their decision to have an OTT release directly, Shakuntala Devi director, Anu Menon in her conversation with Mid-Day said, "I'm excited that the film will have its world première on Amazon Prime Video, and everyone will experience Shakuntala's incredible journey and Vidya's magical portrayal of her. Shakuntala's passion for math, and her determination to spread its joy to the world, was unparalleled. She lived ahead of her times and on her own terms. As we strive to change the narrative of the female protagonist on-screen, her story is one that [ought] to be told. No one could capture her wit and wisdom as well as Vidya did." The premiere date is yet to be announced by the platform. Gulabo Sitabo: Distributor Unhappy With Amitabh Bachchan-Ayushmann Khurrana's Film Releasing on Amazon Prime; Producer Defends Decision (Details INSIDE).

Check out the Announcement

We bet Shakuntala Devi and Gulabo Sitabo won't be the only releases in B-town for this year to go OTT way. Earlier there were reports that Akshay Kumar has already signed a deal with Disney+ Hotstar for the premiere of his next, Laxmmi Bomb. Besides there's Karan Johar's Kargil Girl, Shershaah, Radhe that are apparently in talks to have a direct to web release. Multiplex chains are already dissing these decisions but even producers have to stay afloat in these trying times in the counter arguement.

(The above story first appeared on LatestLY on May 15, 2020 08:19 AM IST. For more news and updates on politics, world, sports, entertainment and lifestyle, log on to our website latestly.com).