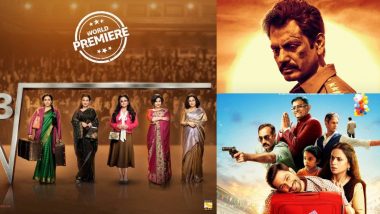 Pre-COVID times have started to seem like a parallel universe now where we were free to go anywhere and watch movies at the theatres. Now with cinema halls shut, OTT is the only entertainment refuge we could seek out. Since the impasse has been going on for three months now, many producers have taken their movies for exclusive digital release, skipping theatres completely. While the debate is still on whether or not it is the right move, some theatre trends too have started to manifest on OTT platforms. One of the major talking points in terms of movies and release dates is Clashes. Now the same has found an alternative in digital platforms much like the movies. Shakuntala Devi,  Raat Akeli Hai and Lootcase are all ready to start streaming from July 31. Akshay Kumar’s Sooryavanshi to Release on Diwali and Ranveer Singh’s 83 to Hit the Theatres on Christmas This Year?

Shakuntala Devi is a biopic on the woman who was known as a human-computer. Her skills got her a place in the 1982 edition of The Guinness Book of World Records. Vidya Balan plays the titular character in the film which will stream on Amazon Prime Video.  Kunal Kemmu's Lootcase will stream on Disney+ Hotstar and Nawazuddin Siddiqui's Raat Akeli Hai will be on Netflix for viewing.

Now where it differs from the clash at the theatres is there is no scramble for screens. It will be available for viewing all the time. If you have the subscriptions, you can check it out whenever you want. Yes, you won't get the experience of a theatre but till that happens, this will suffice. Also, it's an Amit Sadh weekend as he is part of both Shakuntala Devi and Yaara. The latter is directed by Tigmanshu Dhulia and will be out on Zee5 from July 30.  It is about four friends and a lot of gunshots! The movie also stars Vidyut Jammwal, Vijay Verma and many more.

Avrodh, a series on surgical strikes, will stream on SonyLIV from July 31 and also has Amit Sadh in the cast.

(The above story first appeared on LatestLY on Jul 13, 2020 02:11 PM IST. For more news and updates on politics, world, sports, entertainment and lifestyle, log on to our website latestly.com).