After Chris Martin started the initiative #TogetherAtHome, John Legend was quick to follow his suit and now Abhishek Bachchan wants an Indian name to do the same honours. 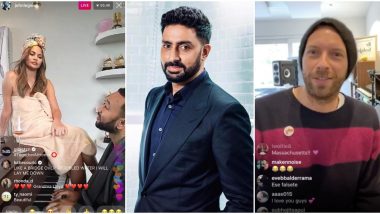 As governments across the world are busy instructing its residents to avoid social gatherings and prefer isolating themselves instead, musician Chris Martin of Coldplay came up with an effective strategy to entertain all his fans. Of course, from the comfort of his home. As people all over the globe struggle to get out of boredom amid their social distancing period, Martin decided to start a live streaming free concert. The popular singer announced that he would be performing for anyone wanting to tune in via an Instagram live stream.

Martin's initiative was appreciated and followed by John Legend who further announced his participation for the same initiative. And as the singers in the west are going beyond their comfort zones to entertain their fans, Abhishek Bachchan feels it's time for an Indian composer to step up and do the honours. The Guru actor suggested AR Rahman and U2's name for the Indian version of #TogetherAtHome Initiative. Now, we don't know if the composers would respond to his suggestion but the idea sounds too delicious for our ears. Madonna’s France Concert Tour Cancelled Due to Coronavirus Scare.

Somebody please reach out to A R Rahman and U2! @vikramchandra https://t.co/aNjdsZ5wky

"Hello everyone. I hope you and your family are safe and healthy. If anyone feels like chatting and listening to some music, I'm going to do a livestream on the Coldplay Instagram," Martin had tweeted, along with the hashtag #TogetherAtHome. And appreciating his gesture, Legend responded by saying, "My friend Chris Martin did a lovely little concert from home today. I'll be doing one tomorrow at 1pm Pacific time. See you soon. We'll try to get through this together! #TogetherAtHome."

Let's hope for the Indian version to release very soon.

(The above story first appeared on LatestLY on Mar 18, 2020 03:47 PM IST. For more news and updates on politics, world, sports, entertainment and lifestyle, log on to our website latestly.com).