After she and husband Thomas Sadoski had kids, Seyfried said: "It became more important for us to do as much as we possibly can to advocate for the work that INARA does: to raise money, to give our own, and also get our kids involved when it's time." 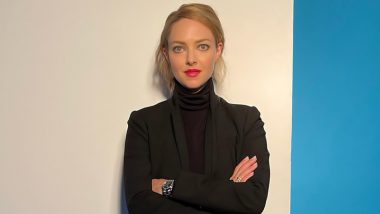 Actress Amanda Seyfried in her Power of Women speech honoured the International Network for Aid, Relief and Assistance, a nonprofit that connects refugee children with crucial medical and mental health care. "This evening, we are gathered to recognise the Power of Women, and I can think of few women more powerful in vision and spirit than my friend, CNN senior international correspondent and the founder of INARA, Arwa Damon, who is sitting right there with us tonight," 'Variety' quoted Seyfried as saying. Amanda Seyfried Birthday: Cutesy Dresses and Elegant Gowns, Her Wardrobe Has the Best of Everything (View Pics).

"It is her passion, her dedication, her fearlessness that has inspired me and inspired so many people." She shared the story of Mia, a Syrian girl whose mother fled their neighbourhood during an attack and fell into the rubble, shattering Mia's bones. "INARA has provided the surgeries and the physical therapy that will allow Mia to fully recover, and ease the heart of her mother, her extraordinary mother," Seyfried said.

She also touched on the Supreme Court's drafted decision to overturn Roe v. Wade, saying that "women's safety and security, as we have just been reminded, is far too often negotiable. And it's not negotiable to me". "There's no better moment, not just to celebrate the power of us women, but to use it," Seyfried continued.

"In these very desperate times where theocrats are diligently working to eradicate our most basic right, we need to be the unstoppable force that creates and sustains community and who make the future better than the present." Seyfried was introduced by her friend and 'Million Ways to Die in the West' co-star Sarah Silverman, who also discussed Roe v. Wade while wearing a 'Bans Off Our Bodies' pin. The Crowded Room: Amanda Seyfried to Star Alongside Tom Holland in Apple TV+ Upcoming Anthology Series.

"What a week for women it's been. F***," Silverman said. "But let's let tonight be a brief respite from that, to fortify our resolve and remind ourselves that when women get together we can do anything. Even when we're fighting to protect our own liberty." Seyfried is fresh off the success of 'The Dropout', in which she played Theranos founder Elizabeth Holmes. The show received rave reviews, stirring up Emmy buzz for Seyfried for her performance as Holmes, who has since been convicted of criminal fraud and faces up to 20 years in prison at her sentencing in September.

In her 'Variety' cover story, Seyfried went in-depth on her process of becoming Holmes and how it impacted her career, which took off with 2004's 'Mean Girls'. "I think people in the industry are realizing that I can be cast as more than just versions of me," Seyfried said. "Of course there's some of me in Elizabeth a" but the more Amanda can get lost, the more thrilling it is for me."

After she and husband Thomas Sadoski had kids, Seyfried said: "It became more important for us to do as much as we possibly can to advocate for the work that INARA does: to raise money, to give our own, and also get our kids involved when it's time. "There's nothing like these generations understanding other perspectives. a It breeds sympathy, empathy and compassion."

(The above story first appeared on LatestLY on May 06, 2022 10:15 AM IST. For more news and updates on politics, world, sports, entertainment and lifestyle, log on to our website latestly.com).