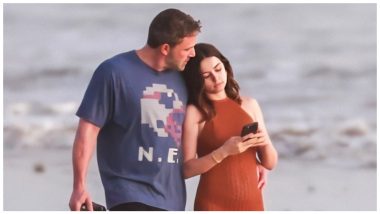 Los Angeles, April 7: Actress Ana De Armas has gushed over the "handsome" leading men with whom she has worked with, saying she was "shaking" when she met actor Ryan Gosling.

The 31-year-old said that she was "shaking so badly" when she met Gosling during her third audition for "Blade Runner 2049". Ben Affleck and Ana de Armas Spotted Kissing and Cuddling While Walking Their Dogs in an Afternoon Stroll (View Pics).

"They put you in a room together and make you read things, to see how your chemistry is. I wish I had the tape of that meeting,"said the actress, who hails from Cuba.

"I've been very lucky - because these men are all very handsome - but the best part of it is who they are as people. I've had the best partners," she added.

De Armas's fame grew with last year's thriller "Knives Out", where she impressed Craig that he got her a part in his upcoming James Bond film "No Time To Die".

She was "shocked" when director Cary Fukunaga offered her the part as she felt she "didn't match" the "beauty standards" expected of Bond girls.

The actress felt that Bond girls generally "need to be rescued. Or they die. Or are evil. I needed to read that script".

She shared that "it took a little, but they sent me the scenes. It's important, because I want to bring something else to the story", and "the character convinced me"

"No Time To Die" was originally scheduled to come out in April. It was pushed due to the coronavirus pandemic.

The actress also spoke about having to learn English and try to break into Hollywood when she first moved to America. Ben Affleck and Ana de Armas Add Fuel To Dating Rumours With Their Latest Romantic Getaway in Costa Rica (See Pics).

"My background and my experiences growing up in Cuba and moving and being like a citizen of the world and adapting and being flexible. It gives me a lot of tools and a different vision and approach towards a character," she said.

(The above story first appeared on LatestLY on Apr 07, 2020 06:28 PM IST. For more news and updates on politics, world, sports, entertainment and lifestyle, log on to our website latestly.com).