Are Priyanka Chopra and Nick Jonas Really Dating? Here's An EXCLUSIVE Scoop On Their So-Called Affair! 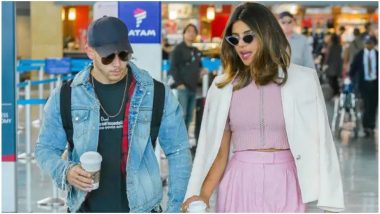 For the past few days, there have been speculations that Priyanka Chopra and singer-actor Nick Jonas are dating each other. It all started with pictures of them getting cozy (with common friends for company) during an outing going viral. Then, just to make the rumours stronger, these two started liking each other's posts on Instagram. And now for all those fans who are shipping Priyanka Chopra and Nick Jonas as a pair, there was more development on that front, as the couple was clicked at an airport being with each other. Are these hints enough for us to believe that Priyanka and Nick are now a couple?

Well, there is more to the story. A source close to the development just debunked the tale that these two are actually dating. Instead, this whole romantic angle is the work of their PR machinery who is trying to make them bag the headlines through the 'affair'. The source EXCLUSIVELY revealed, "Both Priyanka and Nick are represented by the same agency in Hollywood. After Quantico is ending with the current season, Priyanka doesn't have any huge projects left. Even her Hollywood movie career is not going great, as she only has one movie in hand, Isn't It Romantic? (A Kid Like Jake got a limited release). Even in that movie, she doesn't have a big role. Meanwhile, Nick Jonas also is going through a rough patch in his career. So the agency is trying to make these two 'relevant' through this rumoured relationship and has told them to get clicked with each other and like each other's posts."

Hmmm... the whole scoop does seem believable, considering the fact that Priyanka is never the kind of person who likes to 'kiss & tell', and yet she has no qualms getting spotted with Nick Jonas. Maybe, it could be the fact that they are really good friends, with that PR twist put in. This practice of talent management companies/PR's giving out link-up stories is not a new tactic and we have seen such stories in Bollywood. Seeing Nick Jonas and Priyanka together is giving us the same vibes when we get to see Ranbir and Alia together.

So, dear readers, do you believe that PeeCee and Jonas are really dating? Share your thoughts in the comments section below.

(The above story first appeared on LatestLY on Jun 09, 2018 01:57 PM IST. For more news and updates on politics, world, sports, entertainment and lifestyle, log on to our website latestly.com).