Bryan Cranston Birthday Special: Did You Know the Breaking Bad Actor Had Voiced for Lord Ram in an Animated Version of Ramayana?

You know Bryan Cranston for playing one of the greatest anti-heroes in television of all time - Walter White in Breaking Bad. But how many of you know that Bryan Cranston had also dubbed for Lord Rama in an animated movie? 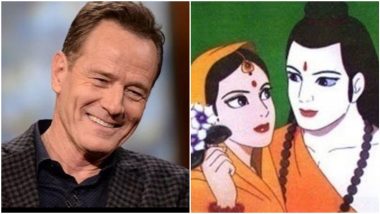 Bryan Cranston Birthday Special: Did You Know He Had Voiced for Lord Ram in an Animated Ramayana? (Photo Credit: Twitter)

You know him as the goofy father in the series Malcolm in the Middle. You know for trying to tackle kaijus before getting killed halfway in the 2014 film Godzilla. You know him for his Oscar-nominated work in the biopic Trumbo. And of course, you know Bryan Cranston for playing one of the greatest anti-heroes in television of all time - Walter White in Breaking Bad. But how many of you know that Bryan Cranston had also dubbed for Lord Rama in an animated movie? Breaking Bad Star Bryan Cranston Believes Injustice Is True All over the World.

On the occasion of the actor's 65th birthday, let's talk about his work in the 1992 animated film Ramayana: The Legend of Prince Rama. An Indo-Japanese production, Ramayana: The Legend of Prince Rama was made for the 40th anniversary of Indo-Japanese diplomatic ties. The film was directed by Japanese filmmaker Yugo Sako, and had two casts voicing for its Hindi and English version.

The interesting part here is that the original English version didn't had Bryan Cranston. It featured Nikhil Kapoor who voiced Lord Ram, Raell Padamsee as Sita, Uday Mathan as Ravana, and Noel Godin as Hanuman. Also, Rahul Bose and Cyrus Broacha had voiced for Bharata and Angad respectively.

The Hindi dub version brought back Arun Govil from the popular Ramanand Sagar series in 1987 to voice Lord Ram, Namrata Sawhney as Sita, while the late Amrish Puri's deep baritone was used for Ravana. Actor-Politician Shatrughan Sinha had served as a narrator for the film. Your Honor Trailer: Bryan Cranston Returns To TV After Breaking Bad With Yet Another Powerful Series.

It was only when Ramayana: The Legend of Prince Rama was released in the States in 2001, that the makers chose a different voice-cast for this English version. So Bryan Cranston was brought in to voice Lord Rama, and this was before his height of popularity, along with other actors. James Earl Jones, known for voicing Darth Vader in Star Wars movies, served as the narrator. Even the title was different - the movie was released as The Prince of Light: The Legend of Ramayana.

A funny thing to note here is that when the film was in production, it faced stiff resistance in India, when the country was in the height of communal tension post Babri Masjid riots. The VHP strongly opposed the production, especially the involvement of a foreign nation in the process. Indian government also rescinded from its part in the collaboration, citing that an animated film on Ramayana would not be received well. Circa 2021, we now have so many animated films and series made on Ramayana and Mahabharata and other mythological stories, that this argument sounds naive then.

(The above story first appeared on LatestLY on Mar 07, 2021 10:01 AM IST. For more news and updates on politics, world, sports, entertainment and lifestyle, log on to our website latestly.com).