Your Honor Trailer: Bryan Cranston Returns To TV After Breaking Bad With Yet Another Powerful Series (Watch Video)

The series' trailer has now been released and if you missed watching the genius that Cranston is on TV, well, this amazing new show is sure to leave you excited. 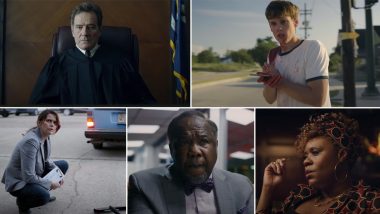 Bryan Cranston is all set to return to TV with yet another gripping series after Breaking Bad and this time it's a legal-crime drama, Your Honor. The 10-episode thriller will see Cranston in the role of a New Orleans judge who quickly gets caught up in a high-stakes game of lies and deceit after his teenage son gets involved in a hit and run case. The series' trailer has now been released and if you missed watching the genius that Cranston is on TV, well, this amazing new show is sure to leave you excited. Breaking Bad Alum Bryan Cranston Reveals He Recovered From the Novel Coronavirus (View Post).

Your Honor stars Cranston as Michael Desiato, a New Orleans judge whereas his son's character will be played by Hunter Doohan. The supporting cast also includes Carmen Ejogo, Isiah Whitlock Jr., Sofia Black-D’Elia, Amy Landecker, Margo Martindale, Lorraine Toussaint, Chet Hanks, Lamar Johnson, and Lilli Kay. The exciting trailer shows us Cranston trying hard to cover up his son's doings. The trailer has him say the lines, "I promise you it's going to be alright."El Camino: A Breaking Bad Movie Review: Aaron Paul As Jesse Pinkman Is Truly Excellent in This Fitting Companion Piece to Breaking Bad.

We bet Cranston's fans are eagerly waiting to see the star in a powerful series yet again and Your Honor is his first lead role on a TV show since his days playing Walter White. Although, for this series to release, fans will have to wait a little longer. Even as the trailer has been dropped now, the series will stream on Showtime sometime in December.

(The above story first appeared on LatestLY on Sep 18, 2020 03:21 PM IST. For more news and updates on politics, world, sports, entertainment and lifestyle, log on to our website latestly.com).