Charlie Chaplin worked for more than 75 years, from childhood in the Victorian era until a year before his death in 1977. He was a part of many great films that even if watched today are equally funny. 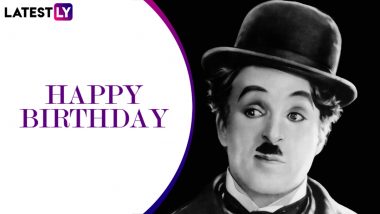 Sir Charles Spencer Chaplin KBE or as we famously know - Charlie Chaplin was a comic actor, filmmaker, and composer. He was a legendary star during the era of silent films and the actor comfortably moved on to work in films that introduced audios and dialogues. He is a global icon because of his charming screen persona, The Tramp and is also considered one of the most important figures in the history of the film industry. Charlie Chaplin Quotes to Observe His 131st Birth Anniversary: 5 Famous Sayings to Remember The Great Comedian.

Charlie Chaplin worked for more than 75 years, from childhood in the Victorian era until a year before his death in 1977. He was a part of many great films that even if watched today are equally funny. His debut film was The Kid, followed by A Woman of Paris, The Gold Rush, and The Circus. he also produced films like City Lights and Modern Times. These movies were hit even without dialogue during the era where dialogues films had gained popularity. His first sound film was The Great Dictator, which satirised Adolf Hitler.

Chaplin was a man with a colourful life. He unapologetically was himself all the time and this landed him in trouble sometimes as well. But while the actor was always in the spotlight, there are some interesting facts that many not know about him. Today marks his 132nd birth anniversary and we decided to bring to you 5 trivial facts about the legendary actor.

Chaplin Was Partially An Orphan

While Chaplin used to live with his parents, Chaplin partially became an orphan when his mother got admitted to a mental hospital. Chaplin’s mother was deteriorating and they did not have enough money to survive, so Chaplin and his older half-brother were sent to a public boarding school for “orphans and destitute children.” His father died of alcoholism and was never interested in taking care of his children.

The Kid Was Not His First Film

While we all know that Charlie Chaplin marked his debut with The Kid, it was not his first film appearance in a film. He first was playing an out-of-work swindler in Making a Living. Chaplin was appalled by his own performance. “I was stiff. I took all the surprise out of the scenes by anticipating the next motion,” he said. He however accused the director of removing his best material from the film out of jealousy.

Chaplin Started Working At The Age Of 5

When Chaplin was 5, his mother’s voice suddenly failed in front of a crowd of rowdy soldiers. The stage manager then sent Chaplin on the stage to sing as his mother's replacement. He sang a popular song called Jack Jones, aiding the audience to shower him with money. Charlie Chaplin 131st Birth Anniversary: From The Kid to Limelight, Best Movies Of The Legendary Actor-Director.

Charlie Was Skeptical About Sound In Films

The actor resisted the arrival of “talkies" but eventually got into making films with sound. It all started with The Jazz Singer in 1927 when films with sound rapidly gained popularity over their silent counterparts. Chaplin was hesitant to adopt the new technology, fearing it would ruin the Little Tramp.

The United States Asked Chaplin To Leave The Country.

The United States permanently exiled the actor. Despite living in the United States for almost 40 years, he never became an American citizen and was asked to leave the country.

Charlie Chaplin was a talented actor who managed to make people laugh for so many years. Join us in remembering the actor on his birth anniversary today.

(The above story first appeared on LatestLY on Apr 16, 2021 08:40 AM IST. For more news and updates on politics, world, sports, entertainment and lifestyle, log on to our website latestly.com).