Lefties are said to be creative thinkers as they have more mental flexibility as compared with rest of the population. Even though it is said that around 10-15% population all over the world is left handed, here is a list of few left-handed celebrities who are making the lefties proud. 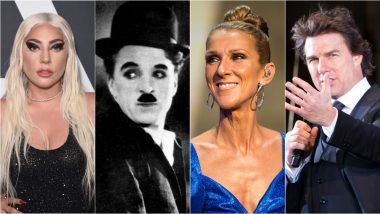 Celebs Who Are Left-handed (Photo Credits: Instagram and File Image)

International Lefthanders Day was first observed in 1976 by Dean R Campbell and is celebrated every year on August 13. it celebrates the uniqueness and differences of left-handed people.

Lefties are said to be creative thinkers as they have more mental flexibility as compared with the rest of the population. Even though it is said that around 10-15% population all over the world is left-handed, here is a list of few left-handed celebrities who are making the lefties proud. Know History, Facts and Significance of Marking The Day Celebrating Lefties.

The star mostly acts in his movies with his right hand, but he has revealed that he is left-handed.  The American star was naturally born left hand but his teachers forced him to write with his right hand and therefore he ended up being ambidextrous. International Lefthanders Day 2021: Crazy Facts about Lefties That Will Boggle Your Mind.

Though she plays the guitar with her right hand but has been spotted signing autographs and holding the microphone in her left hand quite a lot of times.

American actor and film producer Brad Pitt and his ex-wife Angelina Jolie shared this unique feature, which is being left-handed. Though he has been seen signing autographs with his right hand sometimes, therefore this signifies that he might be ambidextrous.

Know for his silent film-era comedy, Charlie Chaplin was always seen playing violin with his left hand.  His fellow performer, Stan Laurel also said that during a U.S. tour in 1912, Chaplin had the strings on his violin reversed so he could play left-handed.

Know for the famous Titanic song 'My Heart Will Go On', Celine Dion has been seen holding the microphone on her left hand lot many times. This confirms that she is another left-handed celebrity that is added to the list.

The American host, Oprah Winfrey loves to cook in her free time. In most of her cooking videos, she has been seen cooking with her left hand. Check her amazing recipes next time and don't forget to notice that she is another proud left-handed celebrity.

He is the most influential celebrity chef around the globe.  Known for his bluntness, Ramsay is often seen slicing and dicing with his left hand in his videos.

All the lefties, feel proud as you share your uniqueness with such amazing celebrities.

(The above story first appeared on LatestLY on Aug 13, 2021 11:58 AM IST. For more news and updates on politics, world, sports, entertainment and lifestyle, log on to our website latestly.com).