Beyonce decided to take a trip to Croatia with her loved ones and going by the pictures that have made way to social media, she is having a blast with her significant other and their three-years-old beautiful daughters. 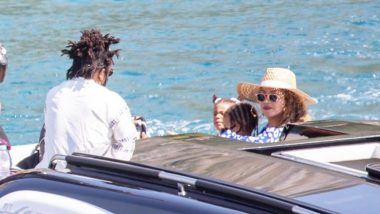 Beyonce celebrated her birthday on September 4. The legendary singer turned 39 this year and she decided to spend her special day with her husband Jay-Z and their twin daughters. Well, she didn't have the option of throwing a lavish birthday party anyway, given the current global pandemic that has forced us to maintain social distance and avoid large gatherings. Beyonce decided to take a trip to Croatia with her loved ones and going by the pictures that have made way to social media, she is having a blast with her significant other and their three-years-old beautiful daughters, Rumi and Sir. Bey slipped into a blue and white outfit and paired it with a sun hat, and sunglasses. Jay, on the other hand, wore a white shirt and sunglasses.

Surprisingly, Beyonce and Jay’s oldest daughter Blue Ivy is nowhere to be seen on the boat. It could be possible that she stayed behind due to school or other engagements. However, it was good to see Rumi and Sir in these photos as they both have not been spotted with their parents on various public outings, unlike Blue, who has been clicked with Bey and Jay quite often. We have to admit that Rumi and Sir seemed to be enjoying their last days of summer in a beautiful location. Beyonce Sharma Jayegi Funny Memes and Jokes Are Twitterati's Way of Apologising to The American Songwriter Beyoncé For Ananya Pandey and Ishaan Khatter's Latest Bollywood Song!

While she kept it low-key this year, last year Beyonce had quite a celebration on her birthday. Check out some pics right here:

Beyonce too is making sure to take all that sun as before she left for Croatia with her fam jam, she was seen enjoying the sunny weather in East Hampton with her kids in late August. Reportedly, Jay accompanied them too, but he was working. In fact, he had a meeting with Twitter CEO Jack Dorsey during this time. It won't be wrong to say that Beyonce and Jay-Z have had an eventful summer so far. We look forward to seeing what they get up to next.

(The above story first appeared on LatestLY on Sep 09, 2020 01:12 PM IST. For more news and updates on politics, world, sports, entertainment and lifestyle, log on to our website latestly.com).