Eva Mendes Hints at Her Acting Comeback, Says ‘I’m Starting to Feel like My Ambition Is Coming Back’ 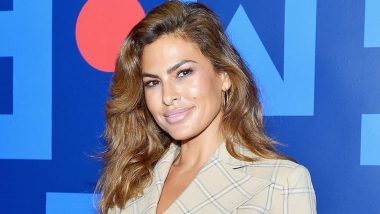 Actress Eva Mendes is hinting that she might return to acting soon. Mendes has taken a six-year-long break to raise her children with actor Ryan Gosling. In an interview with Sydney Morning Herald, the actress sounded as if she might be ready to return to acting, reports dailymail.co.uk. Asked about her priorities, the 46-year-old actress said that her ambition to act was starting to make a comeback. "I feel like, as far as my ambition, it didn't go away, it just shifted onto the children," Mendes shared. Eva Mendes Reveals Why She Doesn’t Post Pics of Hubby Ryan Gosling and Her Kids on Instagram

"I applaud and look up to those women who can do it all, but I'm not one of them -- and, thankfully, I have a choice not to work and I realise how fortunate I am that it's even a choice. I've been so happy to be able to incubate with my babies, but now they are four and six, I'm starting to feel like my ambition is coming back," added the mother of two. The couple began their relationship in 2011, after they met on the set of the crime drama "The Place Beyond The Pines", which also starred Bradley Cooper. Eva Mendes Birthday: From Hitch to The Other Guys – Here Are the American Actress’ Best Films

In the interview, she opened up about raising two young children. "Sometimes it feels like we are running some kind of bed-and-breakfast with very drunk and aggressive guests," she joked, adding: "We really do feel like we are working in a hotel, and the guests are angry and bossy and demand food brought to them. And by the time they go to sleep, we're left to just clean up and talk about how they've treated us that day."

(The above story first appeared on LatestLY on Oct 18, 2020 02:01 PM IST. For more news and updates on politics, world, sports, entertainment and lifestyle, log on to our website latestly.com).